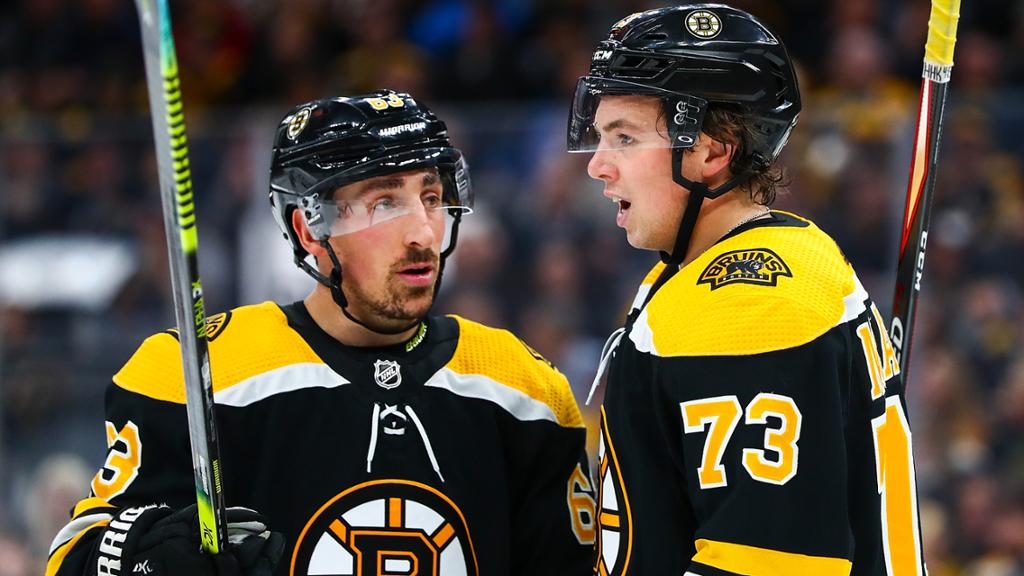 The mathematical midpoint of the 2022-23 NHL regular season is close at hand, and some teams have already played in their 41st game. Sounds like the perfect time to take the temperature of each club against their preseason over/under point projections from Caesars Sportsbook.

Boston heard its offseason critics (Too old! Too hurt! Too far gone!) and issued a resounding rebuttal as the biggest overachievers from their preseason pace and this season’s current Stanley Cup favorites. The Bruins show no signs of slowing either on the back of excellent goaltending, depth scoring (which could be tested with Jake DeBrusk out) and lock-down defense.

Carolina riding an 11-game win streak into the New Year is just one reason they’re second — behind Boston — in outpacing preseason projections. The Hurricanes have it all, from a rookie phenom goaltender in Pyotr Kochetkov to balanced offense, solid special teams and dominant defense. No wonder Carolina has recorded just one regulation loss since late November.

Toronto is surpassing preseason estimates that didn’t even account for a logjam of defensive injuries. The Leafs weathered that storm with a surprisingly strong goalie tandem, top performances from their best players and an enviable depth that has held up over time.

Vegas’ own couldn’t predict the impact new coach Bruce Cassidy, a healthy Jack Eichel and a steady Logan Thompson would have on their hometown team. The Golden Knights are opportunistic, with a depth of talent to complement the resiliency that’s propelled their climb up the standings.

Winnipeg is thriving well beyond preseason expectations under new defensive-minded coach Rick Bowness, who has molded his team into one of the league’s stingiest clubs. That kept the Jets soaring through injuries, and several players are eyeing a return in early 2023. That could put Winnipeg even further ahead.

New Jersey steamrolled its way through the league — and past their projected points pace — with 21 wins in 26 games to start the season. The Devils have cooled since, and they’re one of the most impressive overachievers from preseason estimates. New Jersey getting healthy in the coming weeks could help them surge back up league standings.

Dallas couldn’t help hustling past preseason projections with Jason Robertson leading the charge. Robertson’s line with Roope Hintz and Joe Pavelski has been among the league’s best, and the Stars’ veterans have shined in unexpectedly strong complementary roles. Dallas has rightly earned its reputation as a potential team to beat this season.

Tampa Bay might have slipped off track during an early-season slump. Instead, the Lightning bounced back to begin outkicking their own projected preseason coverage. Brayden Point becoming one of the NHL’s hottest scorers helps, and Victor Hedman has been terrific. Tampa Bay looks increasingly more like the team that repeated as Stanley Cup champions.

New York is sticking closest to its preseason pace. But will that hold true in the second half? December was the Rangers’ best month to date which could foreshadow an improved New York team moving into that overachiever category.

Minnesota’s lackluster October and early November put them off their predicted pace. But the Wild have evolved into a better team since then, one that could easily meet — or jump ahead of — those preseason projections, especially if Kirill Kaprizov (tremendous) and Marc-Andre Fleury (resurgent) continuing leading the way.

Washington’s streak through December has evened them out with the preseason odds after they were well behind earlier this season. Continued strong play could have the Capitals pushing their pace even higher. Washington boasts just one regulation loss in its last 13 games, a budding young goaltender in Charlie Lindgren and a bonafide superstar for the ages in Alex Ovechkin. Everything suddenly feels more possible for Washington this season.

Seattle is in the opposite of a sophomore slump. Rather, the Kraken are one of this season’s great surprises, on the ice and in challenging their projected odds after a rough freshman showing. Seattle’s dominant offense has hidden some deficiencies in goal, but the Kraken are on pace towards an inaugural playoff berth come spring.

Pittsburgh’s penchant towards feast-or-famine has put them slightly off the mark. Case in point: a seven-game win streak through December bleeding into losing six of seven. The Penguins can recalibrate by getting more out of their bottom six and wrangling consistent goaltending from Casey DeSmith while Tristan Jarry deals with a lower-body injury.

Los Angeles is lucky Pheonix Copley stepped up last month. If he hadn’t, the Kings might have glided off their above-average pace. L.A. got there without even one point-per-game forward, either. The Kings have a by-committee approach starting with solid defensive details, a depth of contributions and now, consistent work from Copley between the pipes.

Colorado has tumbled away from their projected points pace. That can happen when a lineup is decimated by injury. The Avalanche will slowly get healthier — Nathan MacKinnon’s recent return was a welcome boost — but Colorado can’t wait for everyone to be healthy to start stringing some wins together. The Central Division is too good.

Buffalo lost its way during an eight-game slide in November, but the Sabres’ have rebounded to trend above preseason estimates. And that’s no fluke, either. Buffalo leads the league in goals per game (3.94), has the second-ranked power play (28.2%) and a blossoming superstar in Tage Thompson. Reaching the postseason this season is no pipe dream for the Sabres.

New York has predictably hummed right along with its preseason expectations. After all, the Islanders were mostly banking on in-house improvements driving their playoff hopes. The stacked Metropolitan won’t make it an easy run, but New York is benefitting from excellent goaltending and averaging 3.16 goals per game in support that could keep them above that projected curve.

Calgary was anticipated to be a Pacific powerhouse. The Flames’ offseason makeover caused some unexpected turbulence though — as did Jacob Markstrom’s early struggles — and Calgary has operated below its projected pace. However, the Flames’ more recent bursts of consistency could have them back on track before spring.

Detroit has bested the bookmakers’ predictions so far after an aggressive offseason that has paid early dividends. Ville Husso is top 20 among league starters in save percentage (.908) and goals-against average (2.86), Dominik Kubalik and David Perron have added needed offensive depth, and overall, the Red Wings are committed to better team defense. That’s how Detroit will keep exceeding expectations, too.

Edmonton’s preseason outlook didn’t account for Jack Campbell’s bafflingly poor play or the quick loss of Evander Kane to a scary wrist injury. So now the inconsistent Oilers have not only fallen off pace, but are barely holding a playoff spot. Something’s got to change for the Oilers to get on track.

Nashville caught oddsmakers’ attention despite that first-round playoff sweep last spring. But the Predators haven’t reached predicted heights, even with Filip Forsberg and his eight-year extension locked in. Nashville is bottom-five in scoring (2.63 goals per game) and top-tier skaters like Matt Duchene and Ryan Johansen aren’t producing as expected. Getting back to the postseason means punching up their totals — fast.

St. Louis is markedly below their expected pace — but hey, it could be worse. The Blues went from bad early on to showing flashes of excellence. But now they’re operating with Ryan O’Reilly and Vladimir Tarasenko on IR. How St. Louis responds to another bout of adversity (can more role players step up?) could tell the true tale of their season.

Florida is neck-and-neck with Columbus for the dubious honor of lagging furthest behind their preseason points pace. The Panthers insist there’s still time to right the ship, and doing so would take a combination of effort, health, increased offense and consistent goaltending.

Ottawa’s active offseason didn’t move the needle much for the sportsbooks — and the Senators have fallen right in line with their projected pace. Ottawa’s injury issues — particularly on the blue line — haven’t helped matters, but lately the Senators look more cohesive. That’s led to more consistent victories and a pattern that might have Ottawa ending the campaign as an overachiever if it keeps up.

Vancouver’s underperformance isn’t necessarily so glaring when taken as a result of all the off-ice drama. There was preseason drama around Bruce Boudreau’s long-term status, questionable contract negotiations and what could be expected of Brock Boeser, Elias Pettersson and Quinn Hughes. Turns out, that was the tip on the iceberg on Vancouver’s quandaries. We’ll see how team president Jim Rutherford & Co. approach trade season to set the Canucks up for more future success.

Montreal has regressed from a surprisingly hot start to be just a bit behind its preseason pace. But the Canadiens continue to slip. Montreal was outscored 26-8 on a recent five-game skid, has one regulation win since Dec. 1 and too many passengers all around. That formula won’t keep Montreal ahead of its curve.

Philadelphia is, essentially, what the oddsmakers thought they’d be. Nothing wrong with that. The Flyers will glide their way into trade season as a team looking to deal players, and see where that takes them. Is it a rebuild? A retool? A lottery win for the No. 1 overall pick? Time will tell.

Columbus’ season has defied even the oddsmakers’ relatively humble projections. The Johnny Gaudreau bump was washed out by a tidal wave of injuries holding the Blue Jackets under water. Spotty netminding and averaging the second-highest shots against per game (35.3) is a bad combination, too. Columbus’ goal should be staying competitive in the second half.

Arizona is on pace now to exceed preseason projections — for which Karel Vejmelka and his excellent play in net deserve credit — but how long will that last? And could that margin actually grow even further? The Coyotes have been surprisingly competitive until now, and if Jakob Chychrun remains on the team — and remains healthy — Arizona should have a solid outlook on the rest of this season.

San Jose has stumbled off its preseason pace, but perhaps by a lesser margin than they might have if not for Erik Karlsson’s career year. Now, with the Sharks projected to be dealing players away come trade season — and Karlsson in the mix as potentially on the move — San Jose’s fall off track could become more acute.

Anaheim wasn’t expected to be a playoff contender. And now the Ducks — by virtue of earning only three regulation victories through their first 38 games — are right there with Florida and Columbus as slinking furthest off their preseason points pace. A silver lining? The Ducks’ odds in the Connor Bedard Sweepstakes have greatly improved from a few months ago.

Chicago is more all-in with its rebuild/fall for Connor Bedard than the sportsbooks thought. There were low expectations for the Blackhawks going into this season, and still they’re top five among teams tracking away from that preseason pace. But given what Chicago is trying to accomplish, maybe that’s a good thing?