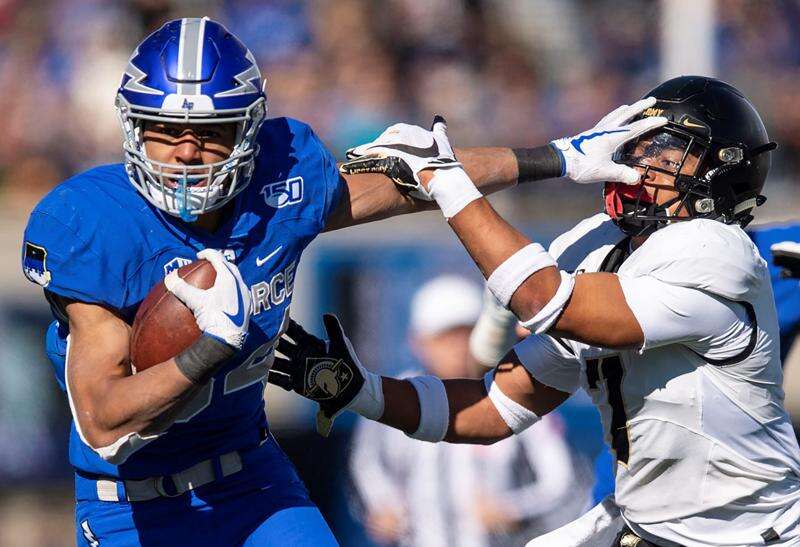 The Mountaineers have been tough to figure out. They very nearly beat a UNC team that is now 7-1 and beat Texas A&M in College Station, but they also lost at home to James Madison and at 3-5 Texas State.

Army has won four of the last five meetings with Air Force, but Jeff Monken’s team has taken a step back this season, sitting at 3-4. The Falcons are 5-3, but their offense has been all over the map, averaging 40-plus points in four games and 14 or less in three of them. This one should tilt more on the lower-scoring side.

The one glimmer of hope in A&M’s fourth straight loss last week to Ole Miss was the encouraging first start by freshman QB Conner Weigman (28-for-44, 338 yards, four TDs, 0 INTs). The Aggies now have a promising passing attack with Weigman and WRs Evan Stewart and Moose Muhammad III, and Florida ranks 87th against the pass.

First of all, Gus Johnson, welcome to the Big 12. It has been a while since you got to see someone other than Ohio State or Michigan. Texas Tech is coming off a brutal 45-17 loss to Baylor that dropped the Red Raiders to 4-4. They don’t seem like the team that could put a stop to Max Duggan, Kendre Miller and the rest of TCU’s big-play offense.

It could be that Georgia is talented and physical enough to bully Tennessee and disrupt that offense. But Josh Heupel’s team is no fluke. The Vols blew out LSU in Death Valley, put up 52 on Alabama and beat a top-20 Kentucky team 44-6. Neither a hostile atmosphere nor the Dawgs’ athletes on defense figure to intimidate them.

Another tough turnaround for Oklahoma State, which got walloped 48-0 by Kansas State and now faces a likely rejuvenated Kansas team coming off an idle week. The Jayhawks may have injured QB Jalon Daniels back too; he’s been practicing. Kansas is playing its first home game in a month, with a chance to clinch bowl eligibility.

Nick Saban revealed this week that Bryce Young has not been practicing much since suffering a shoulder injury against Arkansas on Oct. 1. That’s alarming. However, it didn’t stop him from having a career game against Tennessee. The best guess is Alabama comes out of its bye week sharper. LSU may have already hit its ceiling.

After bottoming out in a 16-14 home loss to a bad Stanford team, Notre Dame has come to life with a 44-21 win over UNLV and a 41-24 win at then-No. 16 Syracuse. But the Irish offense is still limited – it’s the running backs and tight end Michael Mayer. That’s a tough way to win against a talented defense like Clemson’s.

It’s the one Saturday a year when Hard Rock Stadium fills up for a Miami game, but suffice to say the Hurricanes would have to perform better than they have all season to beat their rivals. They haven’t notched a convincing win since Week 2 against Southern Miss. FSU did lose three straight at one point but throttled Georgia Tech last week.

NC State’s offense has been a mess without injured QB Devin Leary. The Wolfpack are averaging 17.5 points in conference play. Provided Wake star Sam Hartman can shake off his six-turnover nightmare last week against Louisville, the Wolfpack may struggle to keep pace with the Demon Deacons.