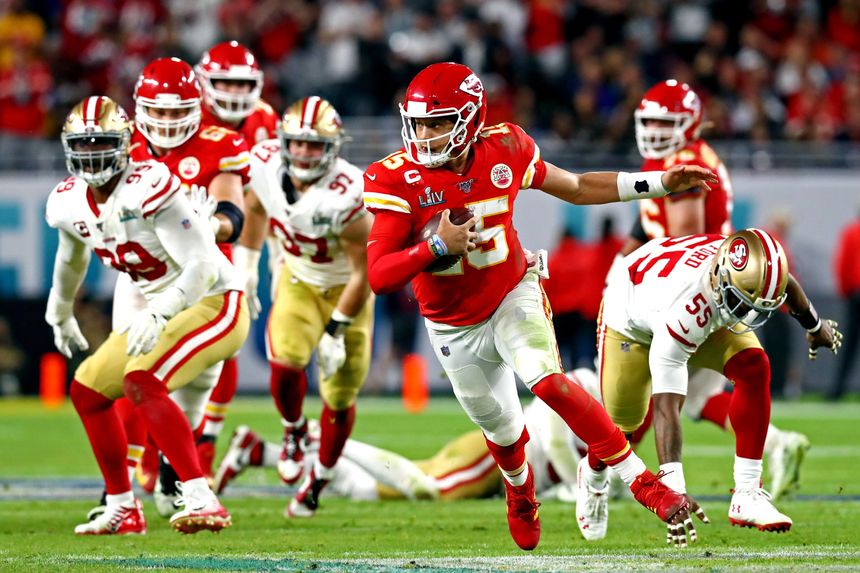 Here is a futures report with Super Bowl odds for all 32 pro football teams. We also dish out consistent betting updates on the state of affairs for each National Football League squad and rank them in tiers. First are the favorites to win the NFL title.

Buffalo Bills (+450): While Josh Allen (18-for-27, 197 yards, TD) had a relatively quiet day along with Stefon Diggs (4-48-TD), the Bills snapped their two-game losing streak without committing a turnover. With home field advantage slipping away, they’re now even with the Chiefs atop odds boards.

Kansas City Chiefs (+470): Patrick Mahomes has flipped from +150 to -150 to win MVP after another clutch performance and a fifth straight start with at least 329 passing yards. Kansas City’s defense continues to improve and their receiving corps will be scary if everyone gets healthy by the playoffs.

Philadelphia Eagles (+650): The Eagles avoided a second straight loss with Jalen Hurts (84 rushing yards, TD) using his legs to lead a comeback at Indy. Their odds shorten slightly from +600 to +550 at DraftKings.

San Francisco 49ers (+900): Consider the fact that Jimmy Garoppolo has a 10-2 record in games with the 49ers when he didn’t log a touchdown pass. The 49ers are incredibly balanced and they would easily be among the top-tier Super Bowl favorites if they solved their QB deficiency.

Dallas Cowboys (+1000): Already gaining steam despite their loss at Green Bay, the Cowboys looked every bit the part of contenders while absolutely crushing the overrated Vikings in Minnesota.

Baltimore Ravens (+1300): The Ravens have allowed just 42.7 rushing YPG at a 2.7 YPC clip over their last three wins and the addition of elite LB Roquan Smith has a lot to do with that improvement.

Miami Dolphins (+1800): The Dolphins are an offensive juggernaut with Jeff Wilson Jr. and Raheem Mostert adding a dynamic element to their run game, complementing their explosive passing attack. They’re listed at +250 to win the AFC East but are getting -650 odds to make the playoffs.

Tampa Bay Buccaneers (+1800): Tom Brady led the Bucs (5-5) to consecutive wins before their bye week and they’re currently getting -450 odds to win the NFC South with the Falcons (5-6) right on their tail.

Minnesota Vikings (+1800): Kirk Cousins continued to flop in spectacular fashion in any game outside of the 1 p.m. EST window, although some of the blame for Minnesota’s 40-3 beatdown can be shared by his offensive line.

Cincinnati Bengals (+2500): Joe Burrow spread the ball around to beat the Steelers in Pittsburgh, securing Cincy’s first division win of the year. Ja’Marr Chase (hip) is expected to miss a few more games with the Titans and Chiefs up next on their schedule.

Tennessee Titans (+3000): Mike Vrabel’s squad has won seven of their last eight games to take a comfortable lead atop the AFC South and they’re now getting -1200 odds to repeat as division champs. Derrick Henry is back to the height of his powers and that will make this team tough to deal with in the cold.

Los Angeles Chargers (+6000): While they dropped another close game to the Chiefs and are outside the playoffs at 5-5, the Chargers got Keenan Allen (hamstring) and Mike Williams (ankle) back in that contest and are looking far more dangerous with those weapons.

Seattle Seahawks (+5000): Seattle’s surprising four-game win streak came to an end in Germany at the hands of Tom Brady and the Bucs. They have a great chance to get back on track with the Raiders, Rams, and Panthers up next.

New England Patriots (+7000): The Patriots completed a season sweep of the Jets in classic fashion, as their special teams came through with a clutch punt return TD to win it late. They’re now sitting in sixth place in the AFC and are dead even (+100) to make the playoffs at DraftKings.

New York Giants (+8000): The shine is starting to come off the Giants after an 8-2 start under Brian Daboll. They got absolutely trucked by the surging Lions and now they play four straight division games.

Washington Commanders (+11000): Taylor Heinicke hasn’t been overly impressive, but his leadership has helped Washington to consecutive wins with 320 rushing yards at a 5.4 YPC clip. Washington is in position to battle for a Wild Card spot.

Atlanta Falcons (+20000): Four of Atlanta’s five wins have come by 4 points or fewer this season. The coaching staff is sticking with Marcus Mariota in a run-heavy scheme.

Green Bay Packers (+15000): They might have pulled out of a full nose dive by beating the Cowboys in Week 10, but the Packers were unable to compete against a physical Titans team four days later, and they’re now getting +700 odds to make the playoffs.

New Orleans Saints (+15000): Andy Dalton produced a clutch scoring drive to lift the Saints over the struggling Rams. They’re now getting +700 odds to make the playoffs and +1000 odds to win the NFC South.

Cleveland Browns (+22000): The Browns continued to get pummeled by inside running plays against a pass-heavy Bills team. With +1300 odds to make the playoffs at FanDuel, they can start looking ahead to next season.

Arizona Cardinals (+20000): The Cardinals were able to beat the backsliding Rams but will be hard pressed to top the 49ers in Mexico City if Kyler Murray (hamstring) or DeAndre Hopkins (hamstring) are inactive.

Jacksonville Jaguars (+25000): The Jaguars are rebuilding under Doug Pederson and seem to be trending upwards, but they’re highly unlikely to earn a playoff spot this season.

Los Angeles Rams (+25000): Matthew Stafford suffered another concussion and Cooper Kupp (ankle) is unlikely to return this season with the Rams’ playoff chances circling the drain.

Detroit Lions (+1800): The Lions have won three straight and their title odds have been cut from +100000 to +25000 in that span. Top CB Jeff Okudah (head) will miss at least one game after getting clocked by a teammate.

Indianapolis Colts (+30000): Matt Saturday lifted the Colts to victory in Vegas and nearly beat the Eagles in his first two games. This team is far more competitive so far under his watch, but they might have to climb out of too big a hole to make the playoffs.

Las Vegas Raiders (+30000): This team is loaded with talent and finally scored a win in a one-possession game to move to 3-7 on the season. The Raiders are getting +2800 odds at FanDuel to make the playoffs.

Denver Broncos (+55000): The Broncos lackluster offense cost them another chance to get their elite defense a win. They’re dead last in PPG (14.7) and are a +4000 longshot to make the playoffs.

Pittsburgh Steelers (+75000): Kenny Pickett and George Pickens are flashing impressive chemistry and the Steelers defense looks ferocious again with T.J. Watt back in the fold.

Carolina Panthers (+100000): The Panthers have been more competitive under interim coach Steve Wilks with a 4-2 record against the spread.

Chicago Bears (+100000): Justin Fields continues to put up staggering numbers as a dual threat QB, but it’s only translated to one surprise win over the Patriots, followed by a four-game losing streak.

Houston Texans (+500000): The Texans are the least competitive team in the NFL with the 32nd-ranked rush defense and the 30th-ranked pass offense.