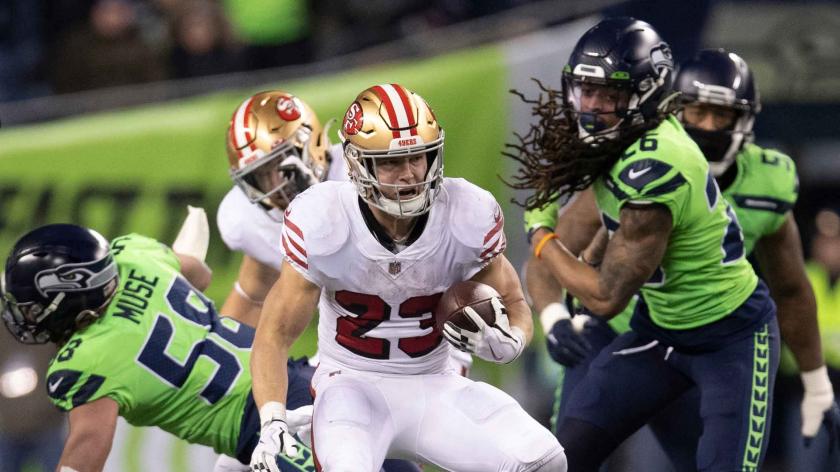 The 49ers swept the season series against the Seahawks with a 27-7 win on the road and a 21-13 victory at home. San Francisco won the NFC West and secured the NFC’s No. 2 seed after Sunday’s 38-13 win over Arizona.

The Seahawks snuck into the postseason with the No. 7 seed after beating the Rams in overtime. Seattle’s playoff fate was sealed after Detroit’s 20-16 win at Green Bay last night.

San Francisco has the NFL’s No. 1 defense, allowing a paltry 16.3 points per game. The offense hasn’t missed a beat with third-string QB Brock Purdy, who threw for three TDs in yesterday’s win against Arizona. Purdy has now had multiple TD passes in six consecutive games.

Christian McCaffrey has scored 10 total TDs since joining the 49ers in October. San Francisco has covered its last five games ATS at home, including yesterday’s win as a 14.5-point favorite over the Cardinals.

Remember Week 3? Jacksonville traveled to Los Angeles and dealt the Chargers what would be their worst loss of the season, 38-10. Trevor Lawrence threw for three TDs and 262 yards to lead the Jags.

The Chargers were favored by 6.5 points in that first meeting and got buried at home. That outcome was an aberration when you consider that the Chargers are 9-1 ATS in their last 10 tilts against the Jaguars.

Los Angeles head coach Brandon Staley was criticized for letting his starters play deep into what was a meaningless game against Denver on Sunday. WR Mike Williams (back) left the game and top defensive stalwart Joey Bosa reportedly aggravated a groin injury.

The Jaguars have returned to the playoffs for the first time since 2017 after beating Tennessee, 20-16, to capture the AFC South title. DraftKings was dealing the Jags at +4000 to win the Super Bowl.

Miami starting QB Tua Tagovailoa is still in the NFL’s concussion protocol, and the Dolphins could really use him in the starting lineup on Sunday.

The Bills secured the AFC’s No. 2 seed after Sunday’s 35-23 win against New England. Nyheim Hines was the game-breaker for Buffalo as he returned two kickoffs for touchdowns.

The Bills and Dolphins split the season series with both teams winning at home in games decided by three points or less.

This game features two teams that critics suggest aren’t as good as their records. The Giants rested most of their starters in Sunday’s 22-16 loss to Philadelphia. New York has been a cover machine ATS in away games, going 7-1 in their last eight tilts including yesterday.

One of the keys to a New York victory will be containing Vikings WR Justin Jefferson, who snared 12 passes for 133 yards and a touchdown in that game.

RB Saquon Barkley will need to perform well again in Minnesota. Barkley rushed for 84 yards including a late 27-yard TD, and he added 49 receiving yards in the first meeting.

The Giants ended the regular season with the best ATS record in the NFL at 13-4.

As muddled as the QB situation is in Miami, Baltimore also faces an uncertain scenario heading into this matchup with Cincinnati.

The Bengals defeated the Ravens 27-16 on Sunday with third-string QB Anthony Brown under center. There are conflicting reports about starting QB Lamar Jackson (knee) returning to play this weekend.

The Ravens are 2-3 without Jackson, and they’ve failed to score more than 17 points in a game during that stretch. Backup Tyler Huntley is also in the QB mix.

Cincinnati is on a heater heading into the playoffs in defense of last year’s AFC title. The Bengals have won eight straight games. They also own the NFL’s second-best ATS record at 12-4.

This matchup on MNF will be intriguing because who knows what we’re going to get from each offensive unit. What are we to make of Dallas after Sunday’s disjointed 26-6 loss at Washington? The offense couldn’t get out of its own way under QB Dak Prescott.

Tampa Bay can leave all of its regular season disappointments and frustrations behind by making a nice run in the playoffs. The Bucs have been equally inept on offense for much of the year, but WR Mike Evans came on toward the end of the season.

Evans amassed 207 receiving yards and three TDs in the NFC South-clinching win over Carolina in Week 17. Keep an eye on his health status after Evans was declared out after the first quarter of yesterday’s 30-17 loss at Atlanta due to an illness.