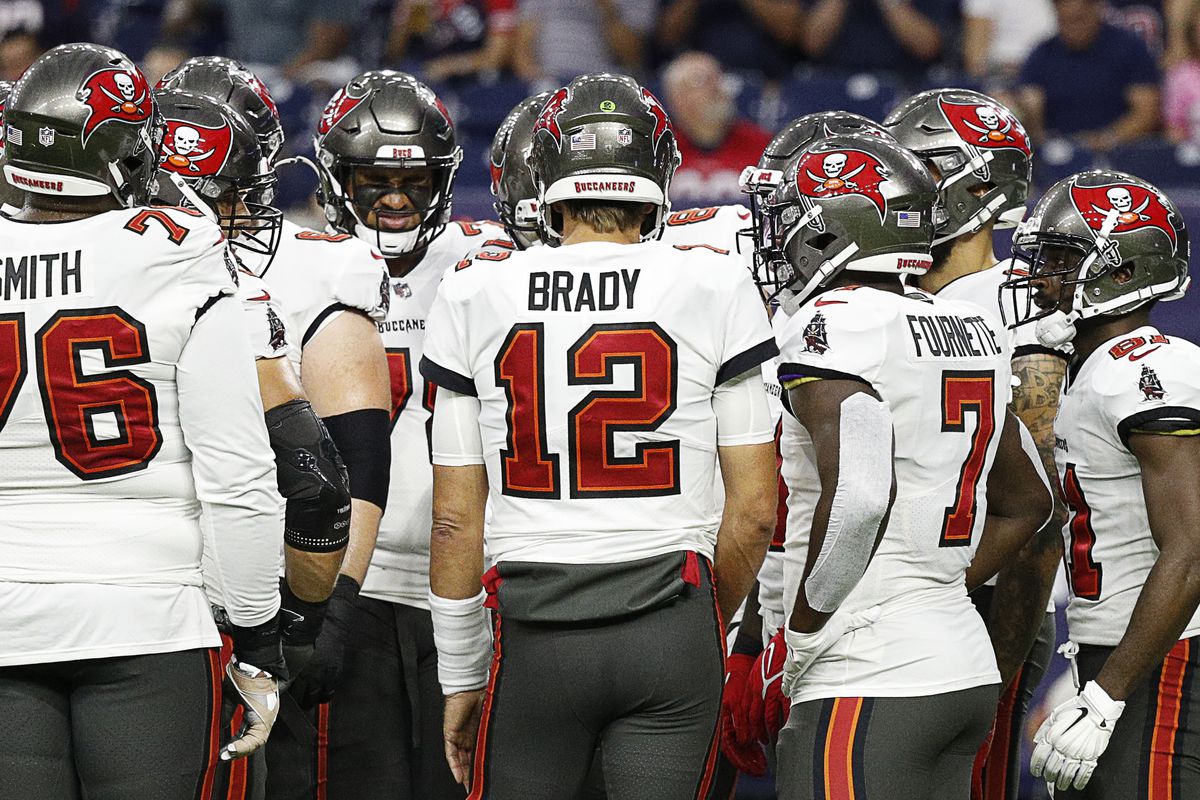 Tom Brady is just having fun out there now, pouring it on with another loaded offense backed by a big playmaking defense. He is taking Rob Gronkowski along for the ride and the rest of the teammates young and old have complete confidence they can follow him again to another Super Bowl ring.

The 49ers haven’t settled on everything offensively, affected by injuries again. Their defense is far from perfect with key returnees and more players hurting there, too, but their scheme and stars are getting the job done early. San Francisco can beat teams in many ways and it is just scratching the surface, which is a scary thought for the rest of the non-Buccaneers NFC.

Patrick Mahomes also is using the rest of the NFL as his personal playground with more of his teammates getting into the magic with Tyreek Hill and Travis Kelce. He is simply operating on a higher plane where his only company is Brady, the GOAT he’s chasing. Now, he could use some help from his running game and defense to close out games.

The Browns were impressive in their loss against the Chiefs in Week 1 and built on that momentum to turn back the upstart Texans in Week 2. Baker Mayfield is operating the versatile, balanced and explosive offense at a high level even down his two veteran weapons. The defense still needs some to jell.

Matthew Stafford and the offense cooled down a little in Indianapolis, with the exception of Cooper Kupp. The defensive downgrade has been there, but it’s not a big dropoff by any means. They are right there with the 49ers as NFC West co-favorites.

The Cardinals escaped the Vikings and got away with a sloppy yet still spectacular performance from Kyler Murray. They have to clean up some physical and mental mistakes that tend to pop up, making them an inconsistent team overall. But they’ve taken care of the bottom line and will continue to grow as young contenders.

The Bills’ defense has been the big story early, supported by Devin Singletary leading the resurgence in the traditional running game to take pressure off Josh Allen, That’s allowed Allen to get back into his downfield passing groove knowing the winning burden has lessened.

MORE: When will Lamar Jackson get big contract extension?

The Ravens’ defense is missing a lot of the usual meat as it’s been ripped apart in the passing game by the Raiders and Chiefs in back-to-back prime-time games. So kudos to Lamar Jackson for doing so much with a shorthanded passing game and a depleted supporting running game to put the team on his back when needed most.

The Seahawks’ defensive issues continue to linger and it was concerning they could not put away the Titans late at home. But at the same time, Russell Wilson, Tyler Lockett, DK Metcalf and Chris Carson have taken the offense into further overdrive.

The Steelers didn’t get enough offense in Buffalo and stole a victory. Unfortunately, even with rookie running back Najee Harris and second-year wide receiver Chase Claypool sparking the attack against the Raiders, they still slumped on the scoreboard. Related to that, of greater concern to Pittsburgh are the growing/groin injury concerns on defense.

The Packers’ two-spot jump is giving them the benefit of the doubt that their Week 1 dud against the Saints was a total anomaly. It looks that way after Aaron Rodgers led them into a legitimate Lambeau leap over the Lions.

The Cowboys used their bonus home game in Los Angeles to take down the Chargers with overachieving defense and a rediscovery of their groove in the running game with Ezekiel Elliott and Tony Pollard to support Dak Prescott. The Cowboys should still be considered the NFC East easy favorites.

Remember: the Titans go as Derrick Henry can go and they were smart to keep feeding him the ball to try to match Russell Wilson in a shootout, because it paid off in the second half and overtime. The defense is terrible so it will just need to keep coming up with a few key spots to complement the offense.

The Chargers have shown much-improved defense with Brandon Staley, but their linebacker and smallish front concerns showed up against the Cowboys’ running backs. Justin Herbert is doing his best to sophomore shine in the offense, but there are a few frustrating mistakes coming in the transition period.

The Raiders have two impressive stamps on their victory passport at home against the Ravens and on the road against the Steelers. It’s hard to believe in them because they are once again defying the situational odds with Derek Carr playing over his head to cover up some fundamental issues involving the running game and defense.

The Saints have been a tale of two teams in two weeks, and expect that inconsistency to continue in the season after Drew Brees as Sean Payton and Dennis Allen try to push the right buttons at the right times on offense and defense. The latter has some problems with a key injury pileup.

The Patriots are the AFC version of the Saints, working to manufacture wins under a venerable Super Bowl-winning genius of a coach with a transitional offense, shorthanded defense and a new starting QB. It worked great against the Jets after not being enough against the Dolphins.

Taylor Heinicke looks like the better choice to help WFT meet its immense offensive potential under Scott Turner and Ron Rivera. Now Washington needs to figure out why the defensive backbone is breaking down for Jack Del Rio.

The Eagles have found their quarterback in Jalen Hurts for now, but despite his high dual threat floor, his inexperience will show at times in tougher games such as Week 2 vs. the 49ers. The offensive line and defense are going back to being strengths, which can be helpful assets in trying to edge the Cowboys for the NFC East down the line.

It’s hard to get a good read on the Panthers after the Jets and Saints made a lot of mistakes in the matchups against them and Sam Darnold simply did what he needed playing off Christian McCaffrey and the aggressive young defense. But that does look like a pretty good formula for wild card-targeted success.

The Broncos are doing what they need to do with running game and defense, too, to support Teddy Bridgewater, who’s making the plays that are available to his latest batch of diverse playmakers. They just need a more impressive resume than the dysfunctional Giants and Jaguars back to back.

The Bears got on the board with Andy Dalton getting more out of their offense and the defense starting to live up more to its reputation. They also learned there will be plenty of lumps with Justin Fields, even though he might help their offense in different ways and will make it better in time.

The Bengals saw the usual fight from Joe Burrow in one of the worst games of his young career. They also should like what they have seen in their defensive improvements and offensive skill potential.

The Dolphins limped through the win over the Patriots before getting ripped by the Bills with Tua Tagovailoa going down. Their defensive issues against run and pass are troublesome for Brian Flores especially if the offense can’t going passing or running.

The Colts don’t look very reliable offensively with Carson Wentz only flashing and the running game not being the same reliable substance yet. The defense has also looked bad against two of the better offenses, the Seahawks and Rams.

The optimist would say the Vikings should be 2-0 with better game-finishing and kicking fortunes. The pessimist would say this part of their underachieving identity under Mike Zimmer. The offense will keep doing its part, but the special teams and defense might be too difficult to overcome.

The Texans were showing plenty of fight with Tyrod Taylor minus Deshaun Watson, so it was hard to see him go down so early for David Culley’s inspired team. They will have a much harder time overcoming their major defensive issues now unless the Watson situation turns in a positive direction.

The Lions didn’t look like total lambs against the 49ers, which is important to now they’re also playing hard for their new coach, Dan Campbell, despite their obvious talent dearth.

The Giants look better with Daniel Jones but there are a ton of other issues not related to the third-year quarterback and the new-look passing game. Joe Judge, Jason Garrett and Patrick Graham are struggling with the overall identity.

The Jets also are realizing that Zach Wilson is on an island at first with the offensive line breakdown, running game uncertainty and still limited receivers. He is smart and talented enough to learn well from the mistakes and the decision to start him right away was still the right one.

What was that? Arthur Smith has been the surprise least impressive new coach of the group as he’s not doing the things to help Matt Ryan overcome some of his team’s fundamental issues. The defense not being able to stop anything is an even bigger problem.

The Jaguars had a brief moment of revelation against the Broncos before Trevor Lawrence took plenty of more rookie lumps in Week 2.