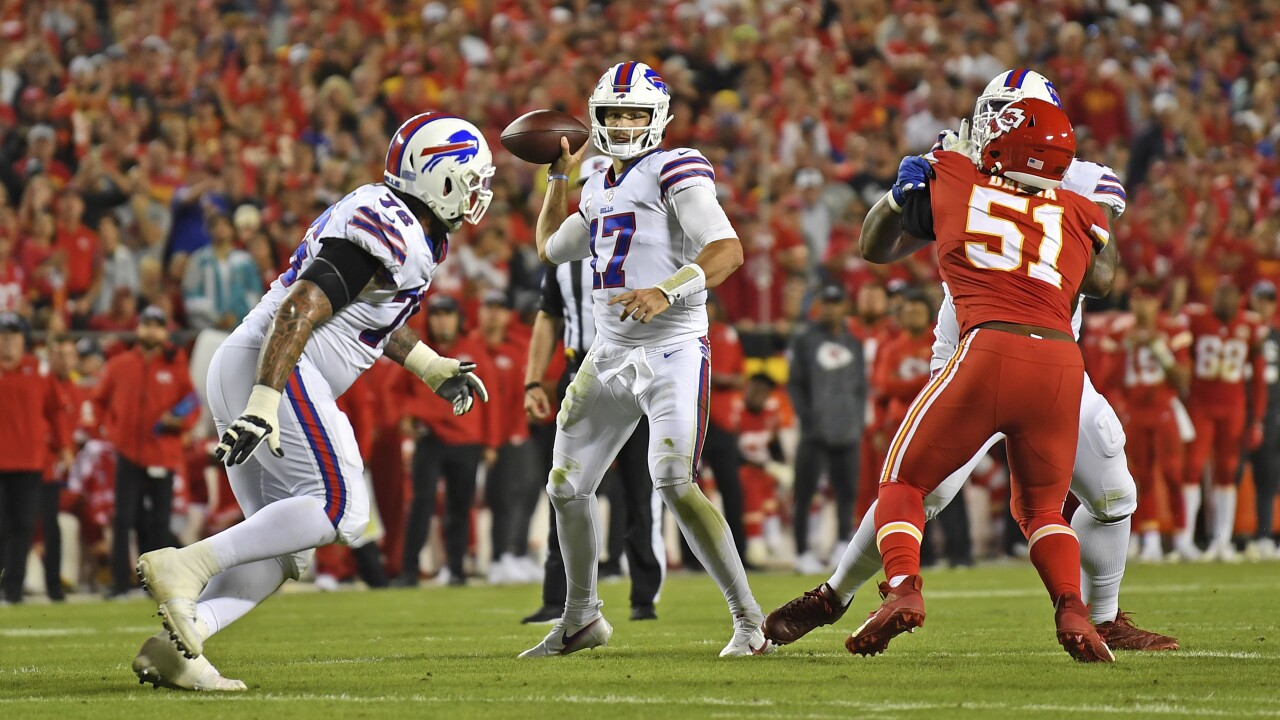 These two squads didn’t meet this past regular season, with their most recent meeting a Week 8 Cincinnati win during the 2020 season. Joe Burrow, who would suffer his season-ending knee injury against Washington just two games later, threw for 249 yards and two touchdowns. Tee Higgins and Tyler Boyd combined for 12 of the then-rookie’s completions, 145 of his yards and one of his scoring tosses (Boyd).

Burrow could certainly have a pivotal role again in this contest, as the way to make inroads against the Titans D – especially on their home field – is through the air. Tennessee allowed an NFL-low 79.6 rushing yards per home contest at 3.7 per carry. The Titans were much more middle of the road defending the pass, surrendering 235.1 passing yards per home contest. Tennessee gave up the seventh-most passing yards overall on the season (4,485), although Burrow will have to be mindful of ball security considering Mike Vrabel’s squad snagged 16 picks.

The Titans got 112 yards and a TD from Derrick Henry in that 2020 losing effort, and the big question this week will be whether the star running back is able to suit up after a nine-game absence due to a foot injury. Henry was on pace for another potential 2,000-yard season when he went down, but if he’s unable to go, D’Onta Foreman certainly makes for a solid fill-in.

The one-time third round pick of the Texans found new life in Tennessee down the stretch with a trio of 100-yard efforts, although either back will have a tough assignment against a greatly improved Bengals run defense that gave up just 103.3 rushing yards per road contest this past regular season. Then again, the matchup doesn’t shape up as very appealing for Ryan Tannehill, either. Cincy was a much better pass defense on the road, conceding just 225.0 yards per contest compared to 270.4 at home.

In what could be the closest game of the weekend, the Titans’ initial 3-point favorite status has grown slightly since the open.

Saturday night won’t be the first meeting between the 49ers and Packers since the start of the 2021 season. The two clubs clashed in Santa Clara back in Week 3, a memorable contest that Green Bay escaped with a 30-28 victory in courtesy of a Mason Crosby 51-yard field goal as time expired.

Defense eventually took a back seat in that contest as the two teams combined for 47 first downs and each quarterback threw for a pair of touchdowns apiece. Two of each squad’s pass-catching stars had big days – George Kittle contributed a 7-92 line on nine targets, while Davante Adams posted 12 receptions for 132 yards and a score in his own right.

Given what should be frigid weather conditions and each team’s recent defensive performances, this rematch could certainly have a different dynamic. The Packers finished the regular season allowing just 210.9 passing yards per home game at a miserly 60.3 percent completion rate, so Jimmy Garoppolo, who threw for just 172 yards and an INT against Dallas in the wild-card win, could certainly have his hands full. On the ground, Green Bay was a bit more generous while yielding 111.4 rushing yards per Lambeau Field tilt, and Kyle Shanahan could therefore certainly opt to attack on the ground frequently. Elijah Mitchell and moonlighting running back Deebo Samuel have proven to be quite the tandem out of the backfield, and factoring in Sunday’s production, San Fran is averaging 159.7 rushing yards per game over the last three.

On the other side, the Pack’s prolific offense will have its own set of challenges, even as MVP candidate Aaron Rodgers enters the game reportedly healthier than he’s been since sustaining his now infamous toe injury. The Niners harassed Dak Prescott for five sacks and limiting him to a 53.5 percent completion rate. San Francisco picked off just nine passes during the regular season, but they did record one INT against Prescott on Sunday and rang up 48 sacks during the 2021 campaign. The Packers did yield just a 5.1 percent sack rate on the season, however, which could certainly help insulate Rodgers from some of the hits.

On the ground, Aaron Jones and AJ Dillon will have to contend with a Niners defense that’s allowed just 75.7 rushing yards per game in the last three (including Sunday), but that also sees both Nick Bosa (concussion) and Fred Warner (ankle) both sporting questionable tags to start the week after suffering injuries versus Dallas.

Bettors are on the Packers thus far, pushing their initial 5-point projected advantage up slightly since the open.

The Rams made quite the statement, especially on the defensive side of the ball, in their resounding 34-11 win over the Cardinals in Monday night’s wild-card clash. Los Angeles’ impressive offense made its share of contributions, but it was Raheem Morris’ group that set the stage for the victory by terrorizing Kyler Murray throughout the night.

Granted, the task gets no easier Sunday afternoon at Raymond James Stadium, even as the Rams will face a much different type of quarterback in Tom Brady. There’s a 2021 precedent for this matchup as well, as the two teams clashed in Week 3 in what was a 34-24 win for Los Angeles at SoFi Stadium. The game turned into an aerial shootout, and Brady notably racked up 432 passing yards at 7.9 yards per attempt while also throwing a touchdown without a pick. Tampa Bay played that game without Antonio Brown, but Chris Godwin, now out with a torn ACL, did contribute six catches for 74 yards.

Mike Evans was able to make even more inroads against Los Angeles’ secondary, posting an 8-106 line, while Rob Gronkowski contributed four catches for 55 yards. The latter two are expected to be Brady’s primary targets Sunday, as they were in the wild-card win over the Eagles. The Rams’ secondary has tightened things up since that first meeting, as L.A. has now allowed just 199.3 passing yards per contest over the last three. The Rams also finished tied for third with 19 interceptions during the regular season before the pair they secured against Murray, and they also finished third in sacks with 50. If at least one of Leonard Fournette (hamstring) or Ronald Jones (ankle) can make it back for this game, it should be of notable help to Brady in terms of keeping the defense honest.

The Rams, like every other Bucs opponent, will have the challenge of trying to establish balance on offense as well. Cam Akers certainly gave the team’s coaches and fans plenty of reason for optimism with his ability to handle 17 carries Monday night in just his second game back from an Achilles injury and also ripping off a 40-yard reception in the process. Akers should be even more prepared to log some lead-back volume in this matchup as a result, while Sony Michel is an outstanding complementary option that can be trusted to spell him whenever necessary. Nevertheless, the duo will be up against the brick wall that is the Bucs’ run defense, one that allowed just 89.1 rushing yards per contest at home. Tampa Bay has been a bit more vulnerable of late with 118.3 rush yards per game surrendered in the last three.

Stafford threw for 343 yards and four touchdowns in that aforementioned Week 3 battle, with All-World receiver Cooper Kupp leading the way via a 9-96-2 line. The veteran quarterback will be down his own No. 2 receiver from that game in Robert Woods (knee), but Odell Beckham has continued to integrate well into the team’s passing attack and contributed four receptions for 54 yards and a touchdown Monday night. The Buccaneers’ pass defense has been more vulnerable than their front seven, allowing 239.8 passing yards per home game on a 65.3 percent completion rate. However, they were a good ball-hawking group in their own right, picking off 17 passes during the regular season and adding two more against Jalen Hurts in the wild-card victory.

With the two team very evenly matched, Tampa Bay is just a standard field-goal home favorite as the march toward kickoff begins.

The Bills struggled with the Jets in the regular season finale for a half-plus before separating, but both sides of the ball were in close to peak form for Buffalo against the Patriots on Saturday night. Sean McDermott’s squad put on a similarly impressive effort versus Kansas City back in their 38-20 win in Week 5, with Josh Allen throwing for 315 yards and three touchdowns and adding 59 yards and a rushing score on the ground.

Buffalo figures to have more of a challenge on its hands in this divisional-round rematch. Kansas City’s defense has tightened up considerably since that early-season debacle. The Chiefs have given up just 17.9 points per home game through Sunday night’s Wild Card win over the Steelers, nearly eight points fewer per contest than on the road. KC has also surrendered a respectable 236.5 passing yards per home contest, but the biggest disparity in the Chiefs’ defensive splits is in their work against the run. While they allowed 130.5 rushing yards per road game, they conceded only 101.1 per home game. Kansas City was also effective preventing chunk plays through both the ground and air, ranking in the top half of the league in preventing explosive plays in both categories.

The Chiefs’ offense, once thought to be a bit on the broken side around the middle of the season, seems to have hit its stride again. Kansas City scored at least 28 points in each of its last four regular-season games and in Sunday’s win over Pittsburgh as well. Zooming back out to Week 10, Patrick Mahomes has a 68.7 percent completion rate and 22:4 TD:INT over that nine-game span, and even without Clyde Edwards-Helaire out with a shoulder injury versus the Steelers, Jerick McKinnon was impressive with 142 total yards and a receiving touchdown. However, Buffalo’s defense will be a good litmus test, as the Bills have allowed just 207.7 total yards per game over the last three and 130 per contest through the air specifically in that span.

In a game that should garner significant betting interest, bettors have already whittled the Chiefs’ initial 2.5-point projected advantage down slightly.