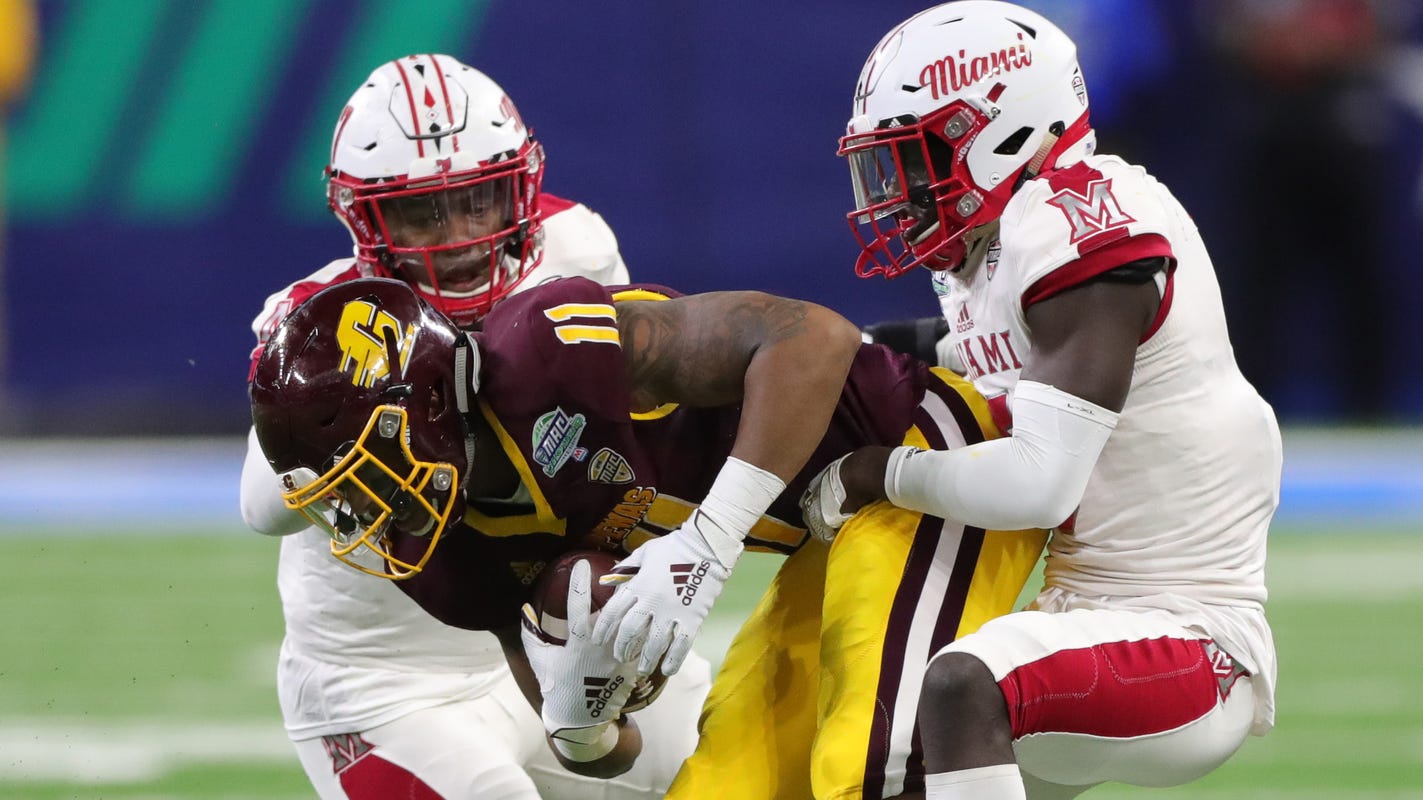 The Mid-American Conference,(MAC), will return to the gridiron on Wednesday, Nov. 4 with six matchups. The 12-team conference plans to play a six-game conference-only schedule and we’ll be covering the MACtion and their popular mid-week games.

Kent State ended up posting its first-ever bowl victory, taking care of Utah State 51-41 in the Frisco Bowl last season, and now they’re looking to build upon the momentum in head coach Sean Lewis’ third season. The straw that stirs the drink for the Golden Flashes will once again be QB Dustin Crum, and he is considered the top quarterback in the league.

Eastern Michigan was also 6-6 SU in the regular season, and like Kent State, their defense allowed six or more yards per play defensively. And they return just five starters from that defense, so defense will be a battle again in 2020. These teams met last season in Ypsilanti on Nov. 29, with Kent State winning 34-26 as four-point underdogs. Kent State has cashed against the spread in five straight meetings, with the under hitting in five of the past seven, including last season’s meeting.

Western Michigan hits the road as heavy favorites against an Akron team which was awful in 2019. Not only did the Zips go 0-12 SU, but they managed to cover just one game, a 20-17 loss against Miami-Ohio on Nov. 20, 2019. Western Michigan LB Treshaun Hayward will look to keep the Zips down. He is widely considered the favorite to win the league’s defensive player of the year.

The Broncos did not have the pleasure of facing the Zips in 2019. One odd thing about Western Michigan in 2019 is that they alternated covers and non-covers in each of their 12 regular-season games before pushing in their bowl game against Western Kentucky. QB Kaleb Eleby is a star in the making for Western Michigan, but he’ll have to make WMU better on the road. In 2019, the Broncos were just 1-5 SU/ATS in six road contests.

Buffalo is considered the favorite in the East Division by many, and head coach Lance Leipold will ride All-American RB Jaret Patterson as long as he can go. The Bulls have depth at tailback, too, as RB Kevin Marks, who also went over 1,000 yards in 2019, would start for many teams in the MAC and other conferences. It’s all about the defense, though. This unit allowed just 21.3 PPG, and returns seven starters, including book ends Malcolm Koonce and Taylor Riggins. Those two combined for 17.5 sacks, and are each on the Bronko Nagurski Trophy watch list.

Buffalo finished strong, winning six of its final seven, including the bowl win over Charlotte, while also covering seven of their final eight outings. Northern Illinois did not go bowling last season, something we’ve grown accustomed to with the Huskies. They did finish fairly strong, going 4-3 SU/ATS in its final seven. They were able to record wins over MAC bowl teams Ohio, Toledo and Western Michigan down the stretch, but NIU saw a slew of talent transfer out at the end of the spring. So they’ll be a work in progress to start, looking to make progress as the season goes on.

This game figures to be one of the most entertaining of the week, and the oddsmakers expect it to be the closest. Ohio struggled in their non-conference schedule in 2019, but they were right at home in the MAC. They topped East favorite Buffalo 21-20 on the road in overtime, and they’re considered one of the top three teams in the East. Ohio’s defense allowed 25.8 PPG in 2019, and they return nine starters.

On the other side of the ball, Central Michigan won eight games a season ago while surprising with a West title, and head coach Jim McElwain’s group will challenge Toledo for the top spot in the West. One area of concern for Central Michigan will be if they can protect their quarterback. They have just one returning offensive lineman. While they folded a lot of transfers, recruits and position conversions into the program, that’s an area to watch early, and it might be a reason to point the arrow in Ohio’s favor in this coin-flip game.

The two sides met in Muncie on Nov. 29, 2019 in the regular-season finale, with the Cardinals winning 41-27 to cover as three-point favorites. The Cardinals did not go bowling, and that win was their only one in the final five, so there are a lot of questions surrounding the Cards. However, it won’t take much improvement to get Ball State back into the postseason. Their final three losses were by four or fewer points, so with a little experience, they could turn those into W’s.

Ball State will need to be better on defense, too, as they coughed up 31.4 PPG in 2019. Miami won eight games overall in 2019, including a surprise MAC Championship Game win over Central Michigan. This one is expected to be a close one, and that’s just the way the Redhawks like it. They were 5-0 SU in one-score games in 2019. And last season for Miami in games between -7 and +7, the Redhawks were 5-1 ATS.

Bitter rivals Bowling Green and Toledo, separated only by 25 miles along Interstate 75, square off at the Glass Bowl under the lights. Lately, this hasn’t been much of a rivalry, as Toledo has won nine of the past 10 in this series.

However, Bowling Green did pull off the 20-7 win at Doyt Perry Stadium in Bowling Green as 26.5-point underdogs to spring perhaps the biggest upset in the MAC last season, dealing a tough blow to their rivals’ chances of a division title and bowl hopes in the process. That was just one of few things to cheer about for the Falcons, a team which covered just once in the final six games, and twice in the final 11.

On the road, Bowling Green was 0-6 SU/ATS, but they are 2-0-1 ATS in their three trips to Toledo. The Rockets were 6-6 SU last season, and the season really turned on that loss to the Falcons. They flamed out in the final three, going 0-3 SU/ATS down the stretch. If they’re going to be better they need to fix their defense, which allowed 32.2 PPG.

Toledo does boast one of the best tailback duos with Bryant Koback and Shakif Seymour, and that will be their strength. The ‘under’ is 10-3 in the past 13 in this series, with the underdog 5-1-1 ATS in the past seven. The road team is also 5-1-1 ATS in the previous seven, so maybe the Falcons will fly away with another cover here.

The Mid-American Conference is scheduled to have the MAC Championship take place on Friday, Dec. 18, 2020 at Ford Field in Detroit, Michigan.

The game will pit the winners from the East and West divisions against one another in the title game.

Listed below are the future odds on all 12 MAC teams.