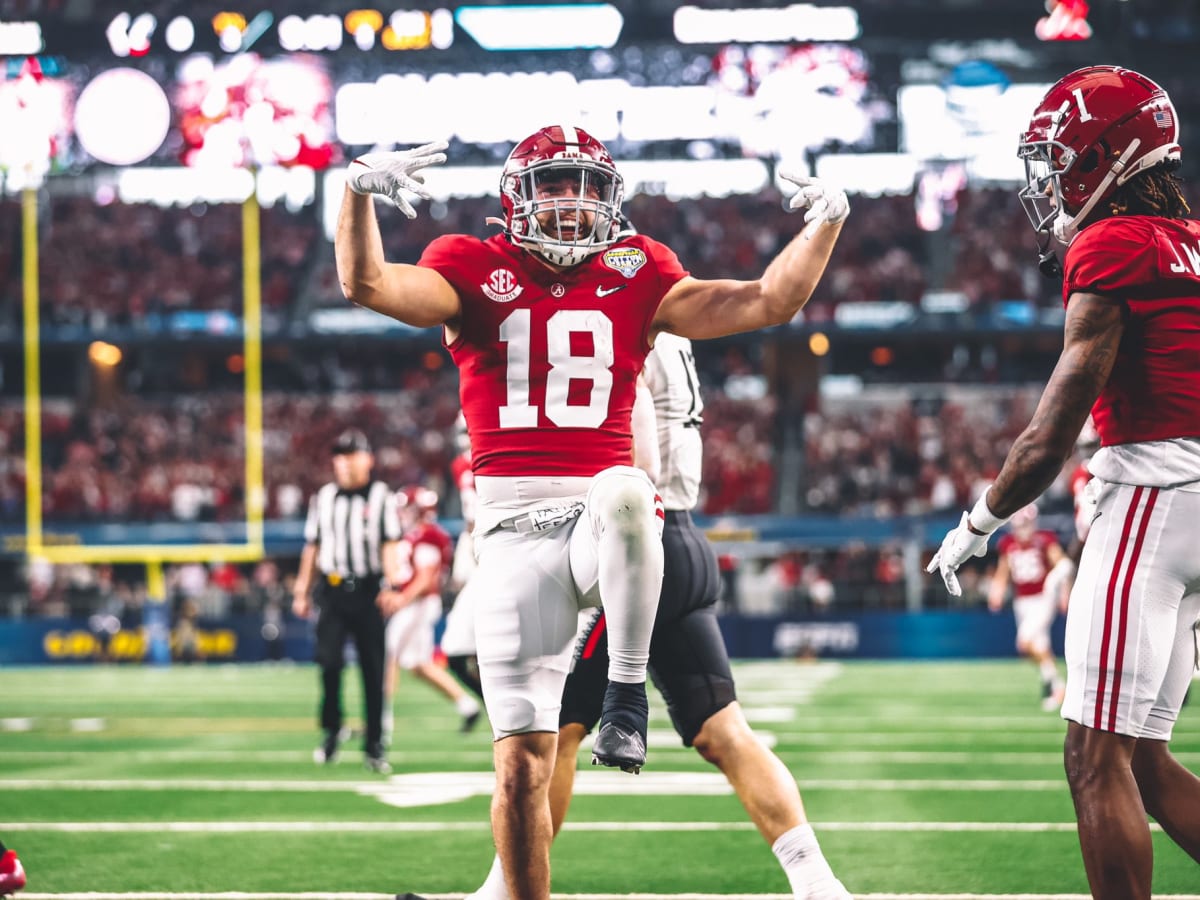 So, yes in some ways, it is way to early. At the same time, it’s never too early to talk about college football.

That said, we like talking about rankings. We like getting an early feel for which teams might be on top. Keep in mind Michigan, which won the Big Ten championship and made the CFP for the first time, was unranked to start 2021

Surprise! Who else would it be? Alabama returns Heisman Trophy winner Bryce Young on offense and linebacker Will Anderson Jr. on defense. There will be the usual attrition to the 2022 NFL Draft, but that has served as a PSA for the program. Georgia Tech running back Jahmyr Gibbs, who totaled 1,211 yards this season, and LSU cornerback Eli Ricks have already transferred to Alabama. There is no reason to think the outlook will be any different under Nick Saban in 2022.

The Bulldogs have built depth through elite recruiting, but the first question is at quarterback. Stetson Bennett can return, as can JT Daniels. It will be a position to monitor. Tight end Brock Bowers leads a talented group of skill position players that return. There will be heavy losses to the 2022 NFL Draft for the nation’s best defense, but the next group of playmakers will step up. Georgia opens the season with Oregon, so it won’t take long to figure out who those new impact players are.

Yep, Dabo Swinney will have the Tigers back in the mix despite replacing longtime coordinators Tony Elliott and Brent Venables with Brandon Streeter and Wes Goodwin. Quarterback DJ Uiagalelei will benefit from another offseason in his effort to hold off incoming five-star freshman Cade Klubnik, and Coby Pace and Will Shipley form a dominant running game. The passing game needs to be better. Bryan Bresee returns to a defense that matured through a six-game win streak to end the season. A trip to Notre Dame on Nov. 5 should be another top-10 showdown.

The talent is there for first-year coach Marcus Freeman. Quarterback is a fluid situation with Tyler Buchner leading over Drew Pyne, but the supporting cast of running backs Chris Tyree and Logan Diggs, tight end Michael Mayer and receiver Lorenzo Styles Jr flexed in the Fiesta Bowl loss to Oklahoma State. The defense will need to rebuild its line and it would not hurt if a few veterans bypassed the NFL Draft. Still, Freeman is working with a loaded roster. Strength of schedule won’t be a problem with road games at Ohio State and USC, a Las Vegas date with BYU and a home game against Clemson.

Another SEC team? Texas A&M was inconsistent this season, but quarterback Haynes King’s early-season injury did not help. LSU quarterback Max Johnson transferred to Texas A&M, and the Aggies have a deep group of young receivers. This is a loaded roster built with four straight classes that have ranked in the top eight according to 247Sports.com. Jimbo Fisher needs to get them back in the College Football Playoff discussion this season in a loaded SEC West. Can they beat Alabama again?

The Jim Harbaugh-to-the-NFL rumors are back, which means the Wolverines are on the right track on the field. There could be a quarterback controversy with Cade McNamara and J.J. McCarthy, but Donovan Edwards and Blake Corum will form a dynamic backfield and a young group of receivers should get better. Still, the offensive line replaces three seniors. Defensive coordinator Mike Macdonald will have to remodel a defense that loses edge rushers Aidan Huthinson and David Ojabo along with defensive tackle Chris Hinton. There is a lot to replace, but the schedule is set up for a fast start and expectations are high again in Ann Arbor.

Baylor is back thanks to the no-nonsense formula from coach Dave Aranda, and that led to an unexpected Big 12 championship in 2021. Gerry Bohanon returns at quarterback, and Trestan Ebner has the option to return for one more season. The defense loses several key pieces, including Jaylen Pitre, but the interior should be strong on both sides. That should keep them in the Big 12 championship race again.

Dan Lanning left Georgia to become the Ducks’ new coach, and it’s a move that’s going to make a long-term difference in Eugene. In the short term, Auburn quarterback Bo Nix transferred and should be the starting quarterback. Byron Cardwell could be a breakout star at tailback along with a young receiving corps. Noah Sewell and Justin Flowe return to lead a talented defense. The Ducks were humbled twice by Utah in Pac-12 play, but this is the most-talented team in the Pac-12 in 2022.

The Utes will fly under the radar again, but the defending Pac-12 champions will be in the mix with longtime coach Kyle Whittingham. Quarterback Cam Rising settled in as a reliable starter, and Tavion Thomas is back at running back. The defense loses linebacker Devin Lloyd, but Florida transfer Mohamoud Diabate could be an instant impact player at the position. Speaking of Florida, that is where the Utes will open the season in a high-profile non-conference game for the Pac-12.

The Demon Deacons return most of their starters, including starting quarterback Sam Hartman, from a pin-ball offense that averaged 41 points per game. Dave Clawson stayed put in this coaching carousel too, which means there is faith that the program can take the next step after an ACC championship appearance. Clemson remains the obstacle in the ACC Atlantic, but the pieces are in place for another run.

Mark Stoops was given an extension in the offseason, and he kept offensive coordinator Liam Coen and defensive coordinator Brad White. The continuity is there following a 10-win season, and Will Levis is back at quarterback with a full offseason to work with. It wouldn’t hurt if Wan’Dale Robinson returned, and Virginia Tech transfer Tayvion Robinson can make an impact at receiver. The defense was loaded with seniors, so there is a rebuild on that side. Dare we say the Wildcats reload as the second-best team in the SEC East?

Too high? Sam Pittman has worked wonders in two years at Fayetteville, and the Razorbacks bring back quarterback KJ Jefferson. That’s a huge plus for an offense that averaged 30.9 points per game, and Oklahoma transfer Jadon Hasselwood is a nice pickup at receiver. Arkansas has had several players enter the transfer portal, and they play Cincinnati, Texas A&M and Alabama by Oct. 1. That’s a huge first month of the season for a team looking to make the jump in the toughest division in the FBS.

The Bearcats could start the season by being ranked by reputation, and there are holes to fill. It’s not going to be easy to replace quarterback Desmond Ridder, running back Jerome Ford and cornerback Ahmad Gardner. Still, Luke Fickell deserves a fair amount of trust based on the advances in the recruiting the Bearcats make, and they can reload to make a run in the American Athletic Conference. A September visit to Arkansas will be telling. Remember, this is a program gearing up for the Big 12.

The Spartans are coming off an 11-2 season which included a Chick-fil-A Peach Bowl victory, and Mel Tucker has proven he knows how to work the transfer portal. Kenneth Walker III is gone, so the challenge will be maintaining that power running game around a cast that includes Payton Thorne, Jayden Reed and Jailon Nailor. Tucker has revamped the culture in East Lansing. September is a challenge with a road date at Washington on Sept. 17 before a home matchup against Ohio State on Sept. 24.

How much trouble are the Sooners in? Quarterback Caleb Williams entered the transfer portal, and former UCF quarterback Dillon Gabriel will be his replacement. Star receiver Marvin Mims is back, but the string of departures and decommitments following Lincoln Riley’s exit is notable. Brent Venables’ hire is more of a long-term move. This team needs to prepare for the jump to the SEC, and that starts on the defensive side of the ball. Is Oklahoma still the team to beat in the Big 12 after watching Oklahoma State win it this season?

The Big Ten West remains a muddled mess, but the Hawkeyes are the defending champion and return enough starters on both sides to make another run. Spencer Petras is back at quarterback, too, and star cornerback Riley Moss put off the NFL for one more season in Iowa City. The Hawkeyes will have competition from Wisconsin, and Minnesota will be a trendy pick to win the division, too. Kirk Ferentz is 26-9 the last three seasons.

Quarterback Spencer Sanders is back and ready to lead another Big 12 championship run. Brennan Pressley had a fantastic performance in the Fiesta Bowl, and Mike Gundy always finds a way to replace skill-position studs. A veteran defense must be retooled without Knowles, who flipped that unit into a championship-caliber group. The Cowboys travel to Baylor, Oklahoma and Kansas State next season. It won’t be easy.

Lane Kiffin led the Rebels to 10 wins in his second season, but quarterback Matt Corral and offensive coordinator Jeff Lebby are gone. Ole Miss ranked seventh in the FBS in total offense in 2021. How will the Rebels replicate that? Luke Altmyer got some unexpected action in the Sugar Bowl loss to Baylor. The Rebels should have enough talent to stay in the mix in the SEC West.

SN had Texas ranked No. 6 in this poll last season and No. 11 in 2020. We admittedly fall for Texas hype every time, and it’s a nine-spot drop but we’re still “hooked.” Why would be on board given how the Longhorns fizzled to a 5-7 record in 2021? Five-star transfer Quinn Ewers, who has been compared to Trevor Lawrence, is a good start. Bijan Robinson is one of the best running backs in the FBS. The offense should score a ton of points, and second-year coach Steve Sarkisian can learn from the first-year mistakes. The Week 2 matchup against Alabama will be the most-watched game in September.

The Trojans could be ranked higher in a lot of preseason polls based on the Lincoln Riley effect. It is a big-time hire for USC, and he should revive the offense around the right quarterback. Is Jaxson Dart that QB for 2022? That is one engaging question around a roster that should be good enough to compete for a Pac-12 South championship. It might be a year or two before the Trojans are ready for the playoff conversation.

Florida is pressing the reset button with Billy Napier, and it is worth knowing that former Gators coaches Jim McElwain and Dan Mullen hit 10 wins in their first seasons in 2015 and 2018, respectively. Florida has talent, and Napier should be able to mold that into an SEC East contender sooner rather than later. Quarterback Anthony Richardson is in line for a breakout season.

LSU made the splash hire of the offseason by luring Brian Kelly away from Notre Dame. Kelly has more than just his Southern accent to work on. The Tigers are 11-12 the last two seasons. Kelly convinced Myles Brennan to stay on at quarterback, and the Tigers still have enough NFL talent on the roster to string together a nine-win season. The opener is against Florida State in New Orleans.

Pitt won the ACC championship this season; a break-through season under Pat Narduzzi that should carry over on the recruiting trail. Heisman finalist Kenny Pickett and offensive coordinator Mark Whipple are gone, and USC transfer Kedon Slovis will try to revive his career in the ACC Coastal. An early-season showdown against Tennessee is worth watching, and the Panthers can build on this year’s New Year’s Day Six appearance.

The Chanticleers are 22-3 the last two seasons; the fourth-best record in the FBS. Grayson McCall has passed for 53 TDs and six interceptions, and he opted to stay with the program instead of exploring transfer options. That was a huge keep for coach Jamey Chadwell, and Coastal Carolina could be that leap to a New Year’s Day Six bowl as a result.