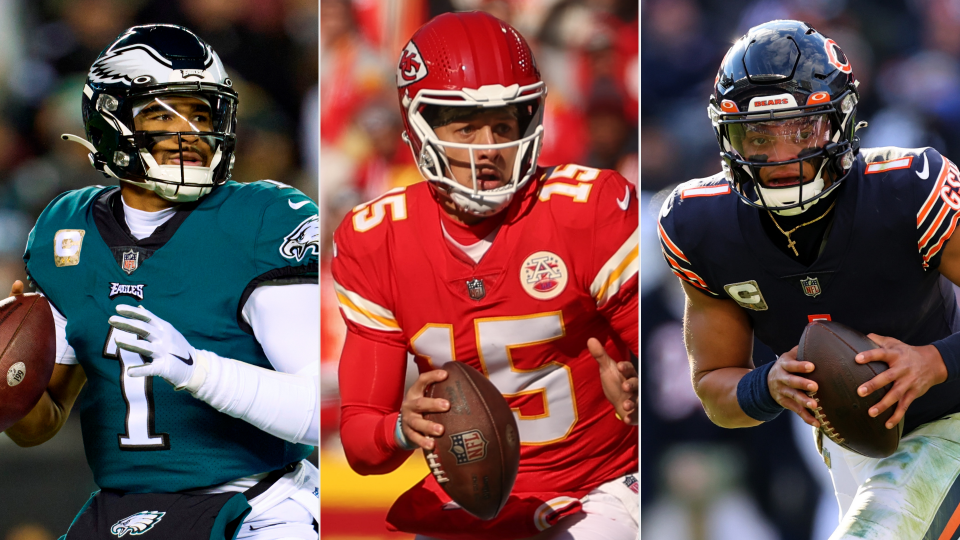 The Packers hammered Tennessee 40-14 the last time they met at Lambeau Field on Dec. 27, 2020. Aaron Rodgers and Christian Watson connected for three TDs in Week 10, which kept their NFC playoff hopes alive. Tennessee’s offense has struggled, but Derrick Henry should feast against a Packers’ defense that allows 140.6 rushing yards per game. Tennessee wins on a walk-off field goal by Randy Bullock.

Justin Fields, who has 325 rushing yards the last two weeks, is drawing comparisons to Michael Vick. Will Fields, a Kennesaw, Ga., native, put on a show against Vick’s former team? Atlanta had a long week to bounce back from a Thursday Night Football loss against the Panthers. These are two of the three worst passing offenses in the NFL. Fields’ play-making on the run will make the difference.

The Ravens had a bye week, and that should help against the Panthers. Baltimore is 2-2 at home, and all of those games have been decided by four points or less. The Ravens are 27th in pass offense; one spot ahead of the Panthers. Will Lamar Jackson or P.J. Walker finds a rhythm through the air? The Panthers are 0-4 S/U on the road. Trust the home team to Win but not cover.

The Browns still have two games before Deshaun Watson returns from an 11-game suspension, and they are going to be brutal. Buffalo is coming off a loss, and Josh Allen will bounce back against a Cleveland defense that was torched by Miami for 39 points and 491 yards in Week 10. The Browns won the last meeting 19-16 in Allen’s second season in 2019. The Bills turn the tables.

The Commanders are on the fringe of the playoff picture, and they have won two road games this season. Houston does not have much outside a  solid rookie season from running back Dameon Pierce (772 yards, 3 TDs). The Texans are 0-4 ATS when they are an underdog of less than seven points.

If Colts interim coach Jeff Saturday knocks the Eagles off, then will he be voted Coach of the Year? Jonathan Taylor resurfaced with 147 yards and a TD in Week 10, and that’s the recipe Saturday is going to ride with Philadelphia coming off a short week. It will work into the second half, but the Eagles get back on track after Monday’s loss to Washington. Jalen Hurts hits A.J. Brown with the game-winning touchdown in the final minute.

These teams met in Week 8, and the Patriots won 22-17 on the strength of five field goals by Nick Folk. The Jets had a bye week to enjoy the victory against Buffalo. Zach Wilson had a season-low 48.8% completion percentage in the first meeting against the Patriots. What will Wilson learn from that experience on the road against a Bill Belichick defense?

The Rams have lost three straight games, a stretch in which they have averaged 14.7 points per game. Now, Cooper Kupp might be out with an ankle injury. The Saints have averaged 11.5 points in back-to-back losses, and they have lost four of five. When two bad teams meet, anything can happen. This is a coin-flip game.

The Lions have a chance for a rare three-game win streak, and their offense looks better when Amon-Ra St. Brown is healthy. New York is 3-1 S/U in home games this season, and all four have been decided by eight points or less. The Giants keep it moving in the right direction in a thriller. The Lions still can’t stop the run, and Saquon Barkley will have a huge game.

It’s the Josh McDaniels bowl in a battle of the most disappointing teams of 2022. Denver has the top scoring defense in the NFL, and yet the offense has been miserable. The Raiders have won the last five in this rivalry and the Broncos have huge issues with injuries on the offensive line.

The Cowboys are favored against Minnesota, which continues to produce close-game victories. Kirk Cousins is 2-8 lifetime against Dallas, and that includes a 1-2 mark with Minnesota. Still, the strong running game with Dalvin Cook and connection with Justin Jefferson has gone a long way this season. All that said, the fact Dallas is favored makes us think Dak Prescott will bounce back on the road. But hold on: It’s the Miracle Vikings!

The Steelers beat the Bengals 23-20 and are a different team with T.J. Watt on the field. The Bengals, however, are coming off a bye week. Joe Burrow will not throw four interceptions this time, and the running game behind Joe Mixon will be a difference maker. Cincinnati picks up its first AFC North victory of the season.

The Chiefs have scored 40-plus points in three of their four road games, and they have a chance to win a ninth straight game at the Chargers’ home field. Patrick Mahomes II maintains the hot hand, and the Chiefs continue to look like the team to beat in the AFC.

The 49ers are rounding into shape as a playoff contender, and the tag-team backfield of Christian McCaffrey and Eli Mitchell combined for 32 carries for 127 yards against the Chargers in Week 10. San Francisco will continue to grind out wins against Arizona, which might be without Kyler Murray (hamstring) for another week. The Cardinals did sweep this series in 2021, but the 49ers are the better team this time.