Tampa Bay Downs Selections Race 1:  HIFALUTIN has placed in six of seven outings so far but can bring that frustrating run to an end by landing this. She was beaten only a neck the last time she raced at this lower level and had the measure of Donnameup here back in March. Action Absolute Ds has now had 16 starts without success but still has stronger form than Mighty Electrica and the remainder are harder to fancy. SELECTIONS: 3-5-8-4

Tampa Bay Downs Selections Race 2: Gerald Bennett is the meets leading trainer by some way and runs two in this with THE GODDESS LYSSA preferred to He’s Smokin Now. The unbeaten filly takes on the boys today having won easily in all three previous outings and looks the one to beat. Liberate was a progressive stakes winner as a two-year-old and returns to action having finished a long way in front of Wicked Warrior when scoring at Mahoning Valley back in October while Two Last Words also landed a stakes race last year but hasn’t raced since November. Frontier Mesa struggled in a claimer last time and looks up against it. SELECTIONS: 4-6-3-2

Tampa Bay Downs Selections Race 3: Little Ms Broadway went close last time when finishing ahead of another reserve in Nagini and can figure if lining-up. The latter beat Moms Love when third here earlier while Splendor Beach and Born To Groove have both found HONESTA too good. Jose Delgado’s charge could have been more favourably drawn today but was only caught in the closing stages over track and trip last time and is taken to go one better. Biz Maker is another with something to find with the selection and has drawn out wide. SELECTIONS: 8-11-12-1

Tampa Bay Downs Selections Race 4: This looks tricky given Flaming Indy has arguably the best form but has drawn out wide. She finished ahead of Lincoln Center in a tougher claimer here last month while Billysbirthdaygirl’s best effort so far came on the Turf track here on her debut and she never threatened the winner when runner-up last time. The debutant Shanghai Kimmy has been working well but a chance is taken on fellow newcomer BELLARIFIC representing an in-form yard and partnered by the meets leading jockey in Antonio Gallardo. SELECTIONS: 5-1-4-10

Tampa Bay Downs Selections Race 5: O’Keeffe had the form to figure last year and returns to action along with Regal Chant. The latter finished ahead of Redeem My Heart when scoring at Presque Isle in October while Dealer’s Girl met trouble in-running here last time and is preferred to No Mercy Percy if getting a clear run. PUNTSVILLE was also below par on her reappearance but ended last year with a victory in a stakes race at Hawthorne and Michele Boyce’s charge should go close in this company if producing a similar effort today. SELECTIONS: 6-2-4-5

Tampa Bay Downs Selections Race 6: Town Classic finished in front of General Paddy when runner-up here in March but had earlier found I’m A G Six too good when the latter scored at over track and trip in the same month. Blue Sky Kowboy had decent form on Turf last year but returns from a lay-offf along with Optic Way and NAVY ARMED GUARD (NAP) is preferred. The latter wasn’t at his best on the Turf here last time but scored over track and trip in this grade before that and can return to winning ways back on this surface. SELECTIONS: 2-1-5-6

Tampa Bay Downs Selections Race 7: The reserve Brown Essence finished in front of fellow reserves Sinatra Devil and Sky D when runner-up here with Neat Street only a nose behind in third. The latter is the only one of the above assured of a run today and can figure in the finish but SNOW LION makes most appeal. The latter has been competing in tougher claimers since landing a maiden race over track and trip in January and is also preferred to recent maiden winner Uncle Kevin while Speakerit has had no luck with the draw.
SELECTIONS: 4-7-2-10

Tampa Bay Downs Selections Race 8: English Laughter and Meilleur are compromised drawn out wide though both have beaten Wilshire Star easily enough recently. Elusive Ro and Gran Greyfrost are not certain of a run but Josie’s Riddle should go well back over a longer distance today. Junction won here the last time he raced over today’s 7f trip back in January but THE KHAN arrives on the back of a recent victory in a tougher claimer than this and is taken to go in again for Gerald Bennett’s leading yard.
SELECTIONS: 8-3-7-10

Tampa Bay Downs Selections Race 9: Idle Time finished in front of Tiz Light The Way when second on his racecourse debut and has decent claims while U S Delta Force and Doubly Blessed are other likely improvers. Beachwalker had the measure of Reliability when third at Gulfstream earlier but FELIX THE FOX has the stronger recent form at the latter track and Ron Potts’ charge gets the vote dropping down in class for this. SELECTIONS: 4-7-2-6 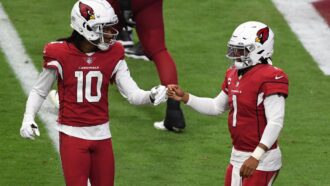