The Patriots opened as massive betting favorites over the Dolphins entering their AFC East divisional matchup on Sunday, and the spread has only continued to climb since then.

New England, coming off of a dominant 33–3 win over the Steelers to open their season, opened as 14.5-point road favorites before their number jumped to -19 at William Hill as of Tuesday afternoon.

If the spread holds, it will be one of the five largest point spreads in an NFL game in the past decade, and the Patriots will be the biggest road favorite over that stretch too.

The Jaguars started the season 0–5, while Peyton Manning’s Broncos were 5–0. Manning and the Broncos won the game 35–19, but fell well short of covering the 26.5-point spread.

The Colts were 0–11 heading into this matchup, as they had lost Peyton Manning for the season. The Patriots led 31–3 at the end of the third quarter, but the Colts came through with the cover, scoring 21 unanswered points in the fourth for a final score of 31–24.

The Seahawks took a 24–0 halftime lead and didn’t look back, as they won and covered 45–17 behind Russell Wilson and Co.

An ugly start to the 2018 season got uglier for the Vikings at home against Buffalo last year. The Bills took an early 17–0 lead in the first quarter before making it 27–10 at halftime. Minnesota lost outright, 27–6.

It was Tom Brady against Bryce Petty on Christmas Eve, and it’s not hard to figure out how this one ended. The Patriots took a 27–0 lead at halftime thanks to touchdowns on three of their first four drives before finishing the Jets off 41–3 for the cover. 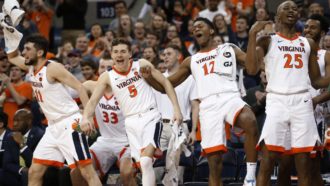