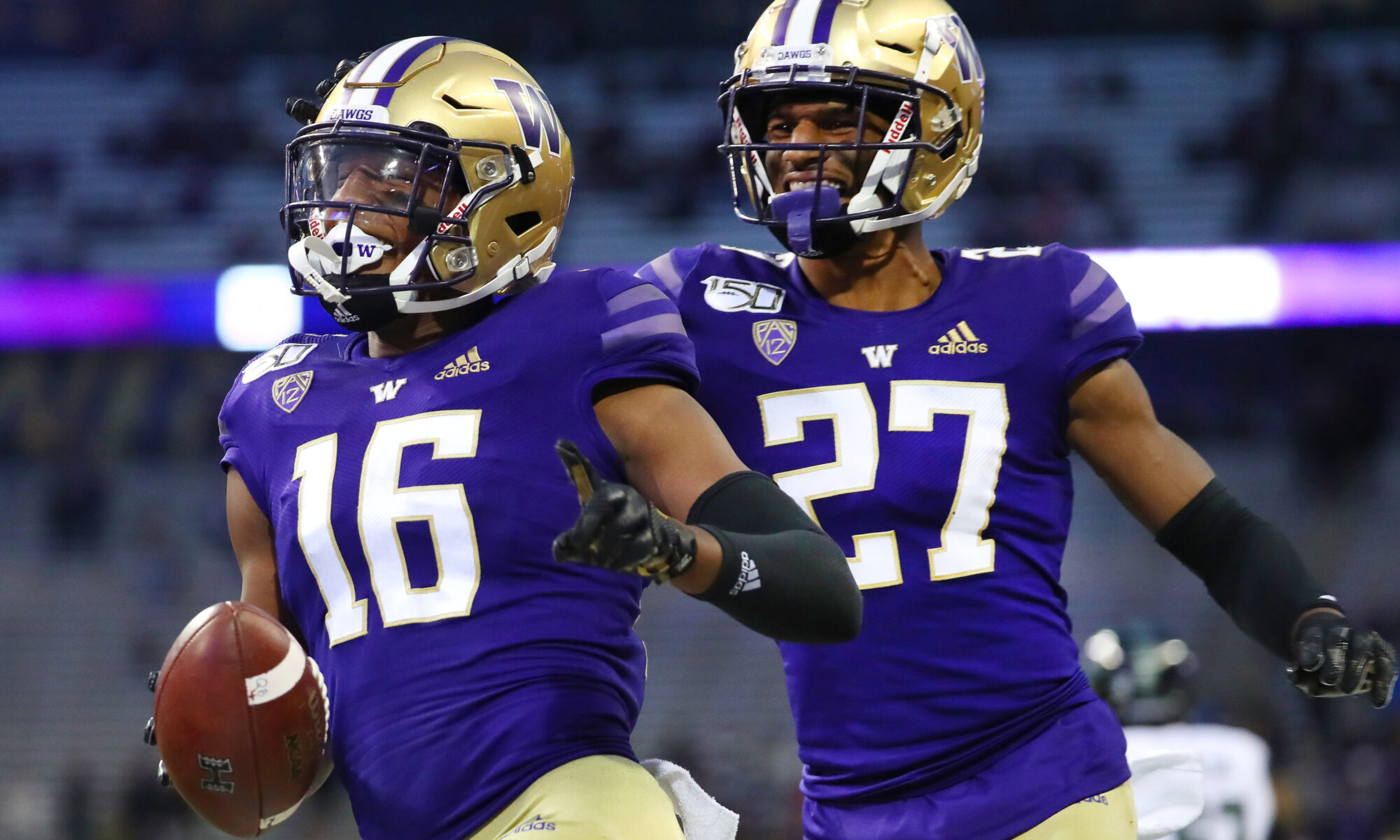 The algorithm or administrator who created the Pac-12’s scheduling formula that produced the league’s 2021 slate deserves a pat on the back for trying to help the league snap its four-year College Football Playoff drought. USC, in particular, will have a red carpet laid at its feet this season as it misses both Washington and Oregon from the Pac-12 North while seeking to gain traction under coach Clay Helton and return to national relevance.

Likewise, the league’s most recent playoff participant, Washington, will play a relatively favorable conference slate. The Huskies don’t play USC or Utah out of the Pac-12 South, but they play rival Oregon at home and also meet quality foes UCLA and Arizona State inside Husky Stadium.

In fact, all three of the league’s presumed frontrunners — Oregon, USC and Washington — have five league home games this season versus just four on the road. Though the trio each faces quality opposition in nonconference action, it’s clear the conference’s top dogs are well-positioned to rack up some wins in league play.

So as the season draws closer, here is a game-by-game projection of how the Pac-12 will shake out in relation to season win total odds provided via William Hill Sportsbook unless otherwise noted.

Analysis: Jedd Fisch is bringing an energy to Arizona that the program seemed to be lacking, and that upbeat culture should help the Wildcats spring an upset or two on a long list of tough opponents this season. Objectively, however, it’s tough to call many victories from a slate that includes games against Washington and Oregon out of the Pac-12 North and tough nonconference contests against BYU and San Diego State. Rebuilding jobs are tougher than ever for first-year coaches with transitioning rosters pitted against groups of super seniors, and Fisch could be in for a long debut campaign. Pick: Under (-110)

Analysis: Arizona State has the talent to compete for a Pac-12 South title, but the Sun Devils are now shrouded in uncertainty following allegations that the staff disregarded NCAA rules about prospect visits during the COVID-19 pandemic. The seriousness of what’s alleged and the institution’s acknowledgment of an investigation suggests the matter will tarnish what was shaping up to be a crescendo season for fourth-year coach Herm Edwards. The Sun Devils are 11-11 in Pac-12 play under Edwards, and the off-field issues seem likely to keep them somewhere around that .500 pace. Pick: Under (-113)

Analysis: Seeking grand conclusions from Cal’s 1-3 season last year is a fool’s errand since few programs were impacted by the pandemic as much as the Bears. There is a nice nucleus of super seniors returning, and it’s hard to imagine the offense being any worse than it was last season under first-year coordinator Bill Musgrave. The defense is usually solid under coach Justin Wilcox, and with a full offseason under Musgrave in the books, the offense should be competent enough to get the Bears to seven wins. Pick: Over (+100)

Analysis: Karl Dorrell did an excellent job in his first season with Colorado, guiding the Buffaloes to a 4-0 start and earning Pac-12 Coach of the Year honors while picking up the pieces left behind by Mel Tucker. Unfortunately, his second Buffs squad faces a brutal schedule that will make returning to a bowl game tough. Nonconference games against Texas A&M and Minnesota plus a league slate that sees Colorado play Washington and Oregon out of the Pac-12 North will be a challenging gauntlet with an inexperienced quarterback. Pick: Under (-120)

Analysis: Is Oregon capable of winning at Ohio State in Week 2? Sure, maybe. But it’s highly unlikely that the Ducks are leaving the Horseshoe with a victory, and that reality leaves them with little margin for error the rest of the way. The good news is that they could feasibly be favored in their 11 remaining games and they avoid USC out of the Pac-12 South. Aside from Ohio State, games at Washington and at Utah may be Oregon’s toughest challenges. If the Ducks split those and take care of business elsewhere, the Ducks can hit the over. Pick: Over (-120)

Analysis: With Tristan Gebbia back healthy at quarterback after leading Oregon State to wins against California and Oregon last season, the Beavers should be fine offensively. The defense, however, has been a consistent source of concern over the last few years and is losing stars Hamilcar Rashed Jr. at linebacker and Nahshon Wright at corner. With USC, Utah and Arizona State all on the schedule out of the Pac-12 South, matching the program’s 2019 mark of five wins will be a challenge. Pick: Under (+100)

Analysis: Stanford’s league schedule is tough because the Cardinal don’t play either of the South division’s potential bottom-feeders in Arizona or Colorado. With USC, UCLA and Oregon on the docket within the first five games, you can expect this team to struggle early while breaking in Davis Mills’ replacement at quarterback. But 11th-year coach David Shaw will get this team going and in position for a potential home upset win over Washington on Oct. 30 following a bye week. Pick: Over (-110)

Analysis: Buckle up, because Chip Kelly’s fourth year at UCLA has the makings of a boom-or-bust season that could determine the trajectory of the program for a long time. Massive opportunities await with games against LSU and cross-division showdowns with Washington and Oregon. UCLA returns most key players from a squad that suffered all four of its losses by six points or less last season, and this looks like a team that can finally gain some momentum. Pick: Over (-110)

Analysis: It might be tempting for USC fans to fixate on the projected loss to UCLA on Nov. 20, but don’t let that upset prediction spoil the rest of the goodies. The Trojans have a manageable schedule that misses both Oregon and Washington out of the Pac-12 North, which makes this team an easy pick to win the Pac-12 South — even if it loses to the crosstown rival Bruins. Reaching the College Football Playoff still seems like a longshot, but these Trojans have the firepower to make some noise in the conference and nationally. Pick: Over (+105)

Analysis: Death, taxes and Kyle Whittingham fielding solid football teams that make bowl games and can hang with anyone in the conference. Such is the case again in 2021 with an offense that will be buoyed by the addition of Baylor graduate transfer quarterback Charlie Brewer. Look for the Utes to remain strong defensively and benefit from a schedule that misses Washington out of the Pac-12 North and brings a massive late-season home game against Oregon that could have league title implications for both. Pick: Over (-120)

Analysis: Much like USC out of the Pac-12 South, Washington is a league heavyweight with a favorable conference schedule. The Huskies miss likely Pac-12 South frontrunners USC and Utah, which sets up second-year coach Jimmy Lake to make a run at the division crown. The defense will be solid as usual, and if this team gets quality quarterback play from either Dylan Morris or five-star freshman Sam Huard, it can emerge as conference champion. Pick: Over (+110)

Analysis: The post-Mike Leach hangover is a real thing, and Washington State can expect a mean one this season after a 1-3 beginning to Nick Rolovich’s tenure last year. After Leach’s falling out at Texas Tech following the 2009 season, successor Tommy Tuberville dipped from eight wins to five in his second year with the Red Raiders. Rolovich also went through a serious second-year regression at Hawaii before ultimately building a 10-win team. Rolovich has some good offensive weapons like all-purpose back Max Borghi and a promising sophomore quarterback in Jayden de Laura, but this is still a transition season for the program. Pick: Under (-110).

We have the largest selection of Teasers and YES, you heard it right, we pay True Parlay Odds!