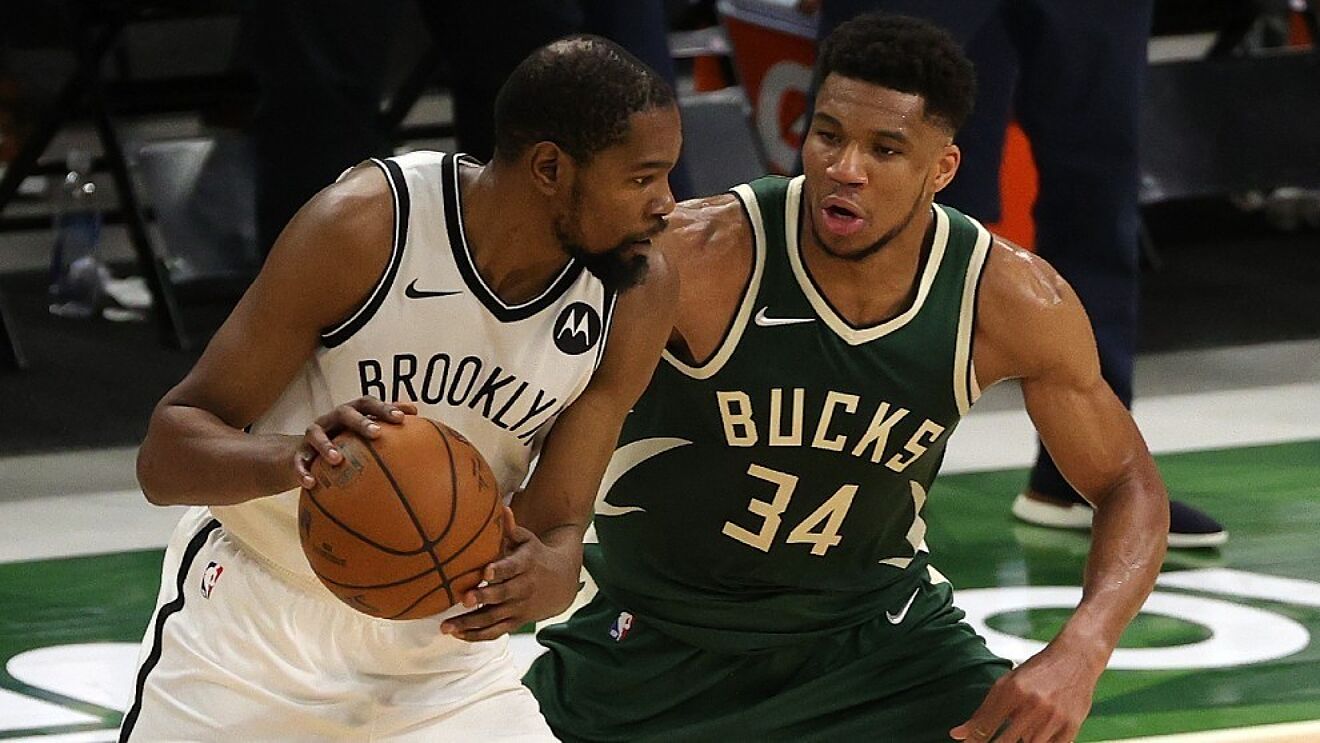 As if the Warriors, with a top-10 offense, the NBA’s best defense and an MVP candidate in Stephen Curry, needed any more help, along comes Gary Payton II, the ex–G League Defensive Player of the Year, busting into Steve Kerr’s rotation with 35 points over two games last week. Oh, and Klay Thompson has started playing 3-on-3 …

A stinker against the Celtics notwithstanding, the Heat defense continues to be stifling, particularly behind the three-point line. Meanwhile Tyler Herro, an early Sixth Man frontrunner, leads the NBA’s top-scoring second unit.

As expected, the Ben Simmons–less Sixers have transformed into an offensive juggernaut, ranking in the top five in field goal percentage, three-point percentage and free throw percentage, the only NBA team inside the top five in each category. Meanwhile, the team has resumed fining Simmons, who to this point has not been needed.

When do we start to really worry about James Harden? He dropped 28 points on Toronto on Sunday but he continues to struggle to get to the free throw line and is shooting below 40% from the floor. Meanwhile, New York City mayor-elect Eric Adams says he will not rescind the city’s vaccine mandate, vaporizing any chance for an unvaccinated Kyrie Irving to return.

The Jazz scuffled on their Florida trip over the weekend, while Jordan Clarkson, the reigning Sixth Man of the Year, has stumbled out of the gates, shooting below 40% from the floor and sub-30% from three. Rudy Gobert, however, has been a menace, particularly on the glass: Gobert’s 16.1 rebounds per game lead the NBA.

Here’s a stat: Last season Chicago ranked dead last in the NBA in free throw attempts (17.5 per game). This season, the Bulls are fifth (22.1), connecting on an NBA-best 85.9% of them. Chicago has also flipped its turnover numbers, from 27th last season to second-best in the league early in this one.

The Lakers have to be watching Montrezl Harrell and wondering where that guy was last season. Harrell is shooting a typically goofy 63.6% from the floor while his scoring 17.7 PPG and rebounding 9.1 numbers are more in line with his Sixth Man of the Year–winning season with the Clippers than his lone season with the Lakers.

L’Affaire Sarver grabbed headlines last week, but the Suns pushed aside distractions caused by their (reportedly) misbehaving owner to run their recent winning streak to four games. Devin Booker is starting to cook after a so-so start. Booker is connecting on 44% of his threes over the last three games, including a 38-point outburst against the Hawks.

Back-to-back losses to Indiana and Toronto served as a reminder that while the Knicks offense is cooking, the defense ranks in the bottom third of the NBA. Oh, and Kemba Walker got a medically advised day off on Sunday. Just something to keep an eye on.

You know it’s a special start when Ricky Rubio—a career 32.6% three-point shooter—bangs in eight (eight!) threes in a road win in New York. Meanwhile Evan Mobley, who looks more and more like a young Anthony Davis every game, is making an early case for an All-Defensive team slot. Mobley leads the NBA—not rookies, the NBA—in contested shots, contested shots per game and contested three-pointers.

It’s hard to get a read on the Mavs, with Kristaps Porzingis in and out of the lineup and Dallas feasting on a fairly favorable early-season schedule. But the Mavericks have looked sharp in fourth quarters, and the defense has been good in spurts. They also have that Dončić guy, who flipped in the fourth game winner with under two seconds of his career against Boston, making him the only player under 23 with that many since 1998.

Back-to-back wins over Denver were impressive, as has been the recent play of Jaren Jackson Jr., who connected on 47% of his three’s in three games this week. The Grizz are still prone to puzzling losses, following up the wins over the Nuggets with a 28-point loss to Washington.

Note to self: Never doubt the Raptors’ draft prowess again. The franchise that developed Pascal Siakam, OG Anunoby and Fred VanVleet has a budding star in Scottie Barnes, who leads all rookies in scoring and rebounding while showing some positively Scottie Pippen–like qualities on both ends of the floor. No one panned the Raps for not taking Jalen Suggs, right?

A one-point win over hapless Houston is all that saved Denver from an 0–3 week. Nikola Jokić has been forced to carry a heavy load offensively because the Nuggets have been getting tattooed when the reigning MVP is off the floor. In other (bad) news, Michael Porter Jr. is battling back problems.

O.K. … is it time to worry about Milwaukee? The Bucks have dropped five out of six after Sunday’s loss in Washington. Without Brook Lopez, the NBA’s premier box-out man, the Bucks have been getting clobbered on the defensive glass, while the defense, top-10 last season, is hovering around the bottom third. Milwaukee needs to get healthy, quickly.

A few days in Minnesota got the Clippers back on track, at least temporarily. Nicolas Batum has caught fire lately, shooting 60% from three-point range over L.A.’s last four games while providing sturdy defense on the other end of the floor.

Lost in the buzz (sorry) surrounding Charlotte’s fast start was that its defense is … not great. The Hornets have surrendered at least 113 points in three straight games, including 140 in a loss to Sacramento. As offensively explosive as Charlotte is, the defense needs a lot of work.

The evolution from good team to great is challenging, and the Hawks are experiencing it. The defense, never great, has bottomed out and Trae Young, who thrived on creating James Harden/Chris Paul–like contact the last two seasons, has seen his free throw attempts chopped nearly in half. Atlanta isn’t sneaking up on anyone this season, and it’s showing.

Damian Lillard’s shooting slump mercifully ended against the Lakers on Saturday, with Lillard connecting on six of his 14 three-point attempts. The Blazers have been better defensively, but ugly losses to the injury-ravaged Sixers and Cavaliers on a recent road trip showed they have a long way to go.

The Kings feasted on the mediocre defenses of Charlotte and New Orleans before getting slowed down by Indiana. Sacramento has to be awfully glad it didn’t offload Harrison Barnes last March. Barnes has been brilliant, averaging 22.2 points per game, a shade under 10 rebounds while shooting a career-best 46% from three.

Some signs of life in Indy, where the Pacers have won three out of four after a 1–6 start. Myles Turner shot 52.4% from three during that stretch, collecting double-digit rebounds in wins over the Knicks and Kings.

Boston was a Luka Dončić dagger from a 3-0 road trip, which included a gritty win over Miami on the second night of a back-to-back. A good sign for the Celtics: Jayson Tatum, who has struggled offensively this season, busted out for 32 points against the Mavericks.

What do the Lakers do about Russell Westbrook? Westbrook’s turnover and missed three against Oklahoma City last week dropped L.A. to 0–2 against the Thunder, and was followed up by a 1–13 shooting night (along with nine turnovers) in a loss to Portland days later. Westbrook says he needs to play harder. That may not be enough.

Is it wrong to wonder what Gregg Popovich is doing here? Pop is just 23 wins from passing Don Nelson atop the all-time coaching wins list, but the way San Antonio is playing, he may not get there this season. The Spurs defense has been pretty good but the offense has been awful, even disorganized, as it was in a loss to the Thunder.

Ah, the good Wolves—we hardly knew ya. Minnesota has dropped four straight and heads out on a four-game road trip through the teeth of the Western Conference playoff field. The shooting has been dreadful. The Timberwolves lead the NBA in three-point attempts but are 26th in three-point percentage.

Magic brass are on the hunt for long term keepers in this rebuilding season and Cole Anthony sure looks like one. Anthony dropped 33 points in a win over Utah on Monday, banging in pull-up jumpers like a 10-year vet. Meanwhile, rookie Franz Wagner has quickly become a presence on both ends of the floor.

The Thunder stink (except against the Lakers), but the star-starved franchise has one in Shai Gilgeous-Alexander. SGA has picked up right where he left off in an injury-shortened 2020–21 season, averaging 23.5 points with a three-point percentage hovering around 40% for the second straight year. Now Oklahoma City just has to get him some help.

Among the many things to like about Jalen Green’s offensive game: He’s getting to the free throw line, 30 times over a recent five-game stretch. That bodes well for a young player who is seeing his name pop up alongside LeBron James and Luka Dončić for scoring numbers as a teenager. If only the Rockets, 28th in offensive efficiency, could figure out a way to play together.

Zion Williamson remains out, Brandon Ingram has been banged up, and New Orleans’s hopes of doing anything meaningful this season are slipping away. Worse, with Williamson, the topic has shifted not just to when he’ll be back, but what kind of physical condition the 2019 No. 1 pick will return in. It’s getting ugly on the bayou.

Hey, look, it’s Cade Cunningham! The top pick made his debut Oct. 30 but had his best game on Friday, when he knocked in three threes and made several key fourth-quarter shots in an eventual loss to Brooklyn. Plenty of pressure on Cunningham with Jalen Green, Evan Mobley and Scottie Barnes putting up big numbers early in the season.